When you drink a lot of tea in the evening and then wake up in the middle of the night and know that you have to leave not only the warm sleeping bag but also the halfway warm hut, it is anything but pleasant. It gets better when you look out of the tiny window and see green lights dancing in the sky – Northern Lights!
I wake Elisabeth and we both put on as many layers on top of each other as fast as possible, grab camera, tripod and headlamps and we are quickly in front of the hut. Our first Northern Lights, so far we only know them from photos!
The following pictures are my first Northern Lights photos ever, the viewing direction is towards Vistas. 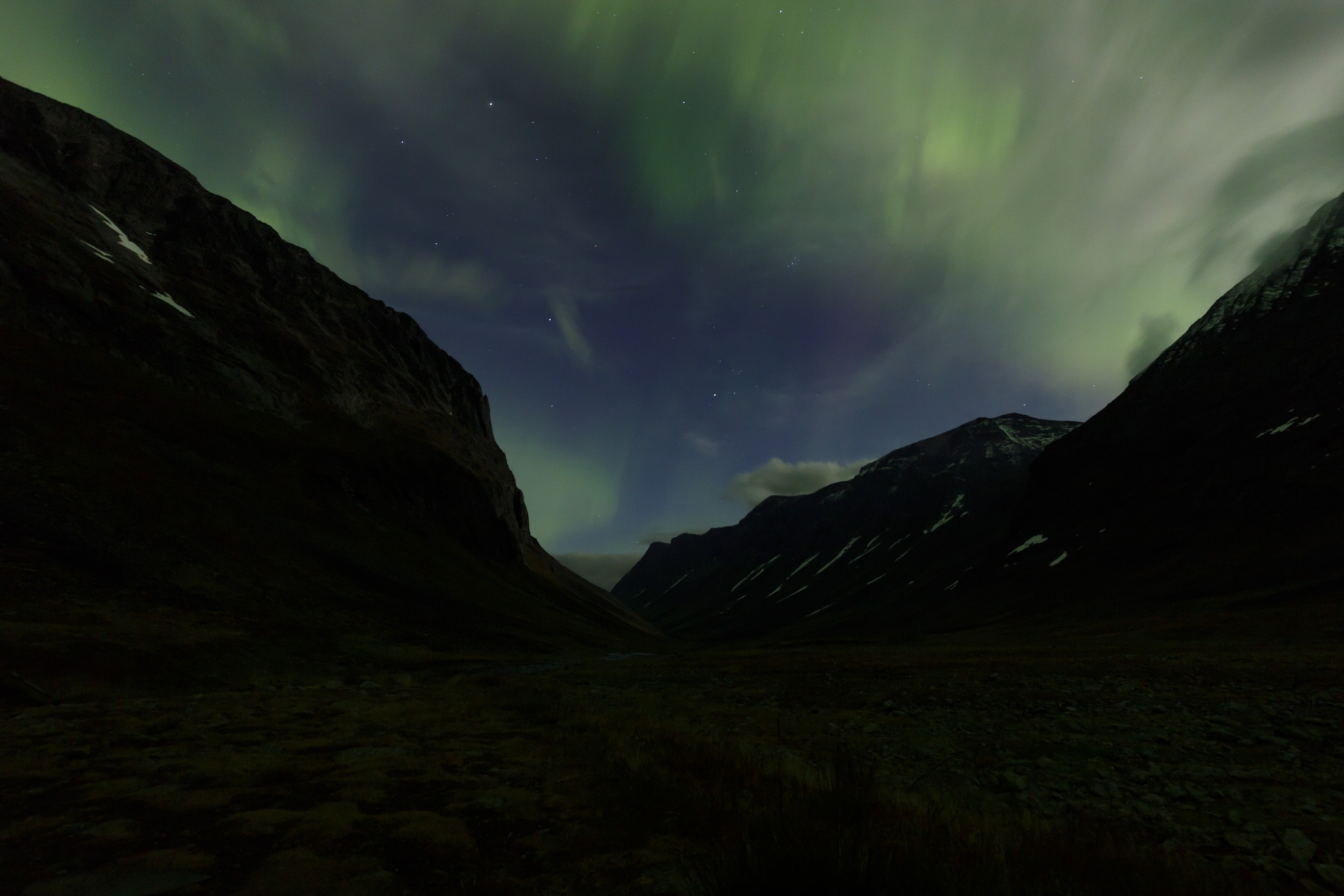 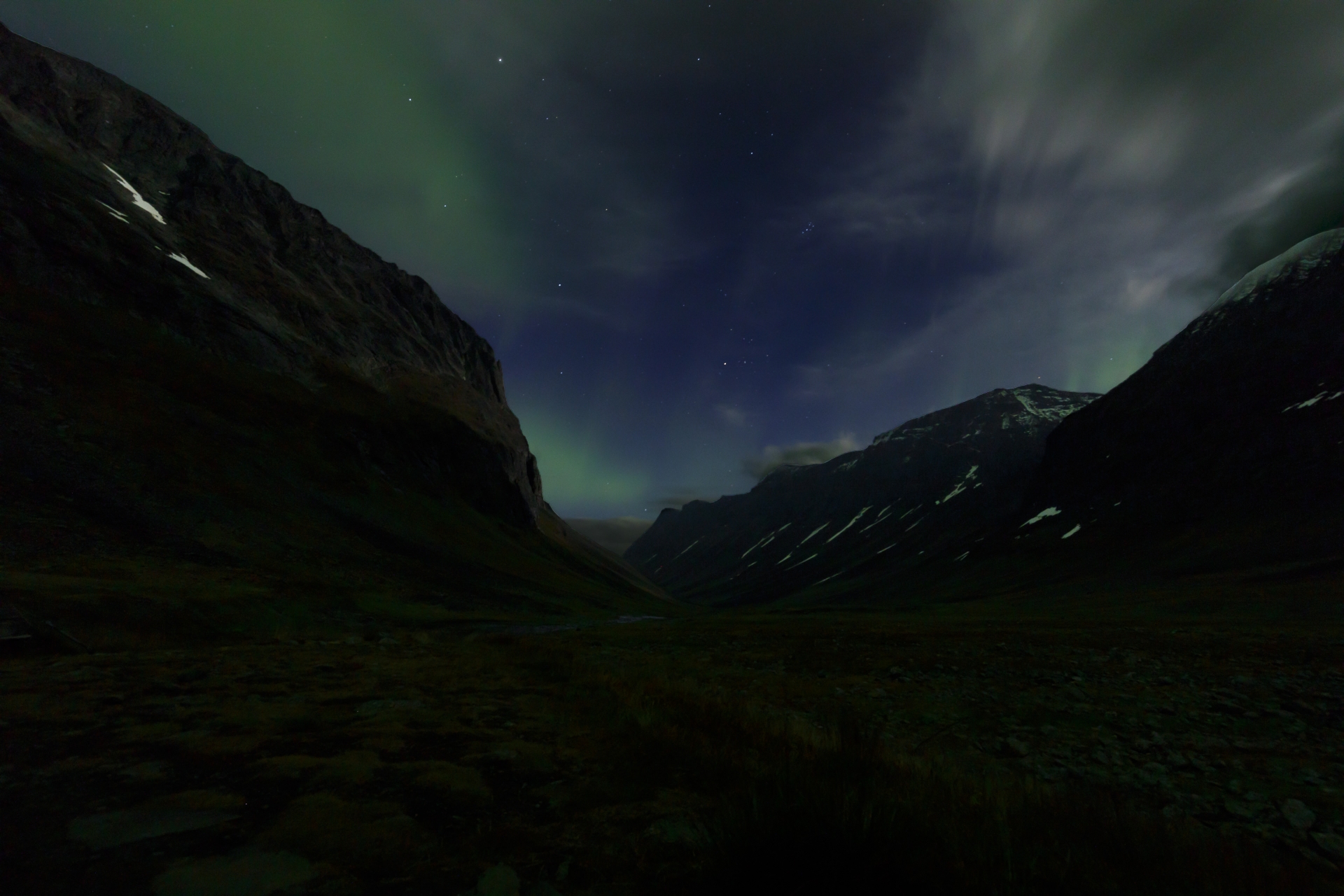 The Northern Lights were more intense when we looked out of the window, we decided to wait – and for the time being I took a picture of the hut. 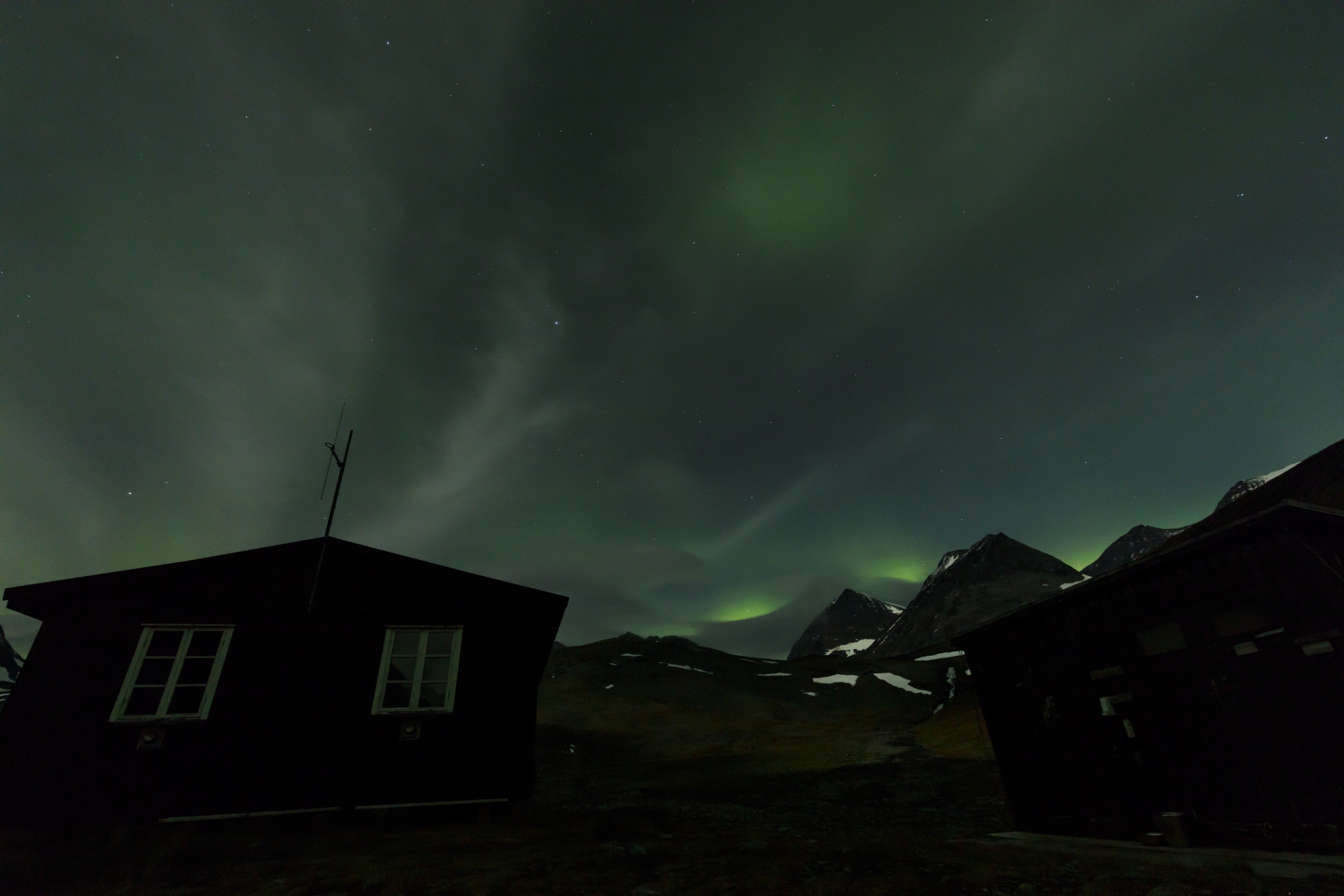 While we hope and wait now in the cold with light sub-zero temperatures, there is time for a few sentences on this natural spectacle.
Reports about northern lights go back over 2000 years and have been associated in different cultures with activities of gods and spirits or seen as harbingers of disaster, especially in Europe (which may be explained by the fact that it is most likely to appear as a red light in Europe off the far north). For us it is of course relevant what the Vikings thought of it: according to their belief a great battle had been fought somewhere in the world. Now the Valkyries rode across the sky to select those heroes who would feed at Odin’s table.
Vintervik has added an interesting Inuit story in the forum and has documented it with a (unfortunately only available in Swedish) Youtube-Video: in the mythology of the Inuit the northern lights are traces of the spirits of deceased people playing football with a walrus head! According to the video, the Inuit word for “Northern Lights” literally means “traces of those who play football”.
Polar lights occur when electrically charged particles of the solar wind in the upper layers of the Earth’s atmosphere encounter oxygen and nitrogen atoms and ionize them. The new state does not last long and the reverse process, recombination, emits light.
Since the solar wind consists of charged particles, it is deflected by the Earth’s magnetic field, which explains why auroras occur mainly in the polar regions, where they penetrate the field lines of the atmosphere. In northern latitudes they are called Northern Lights or Aurora Borealis, in the southern hemisphere they are called Southern Lights or Aurora Australis.
The frequency and intensity is related to the activity of our sun. The sun goes through an average 11-year activity cycle (with fluctuations of 9-14 years) from solar minimum to solar maximum to solar minimum again. Currently we are in a decaying phase, the current cycle has started in early 2008, the solar maximum was 2014. 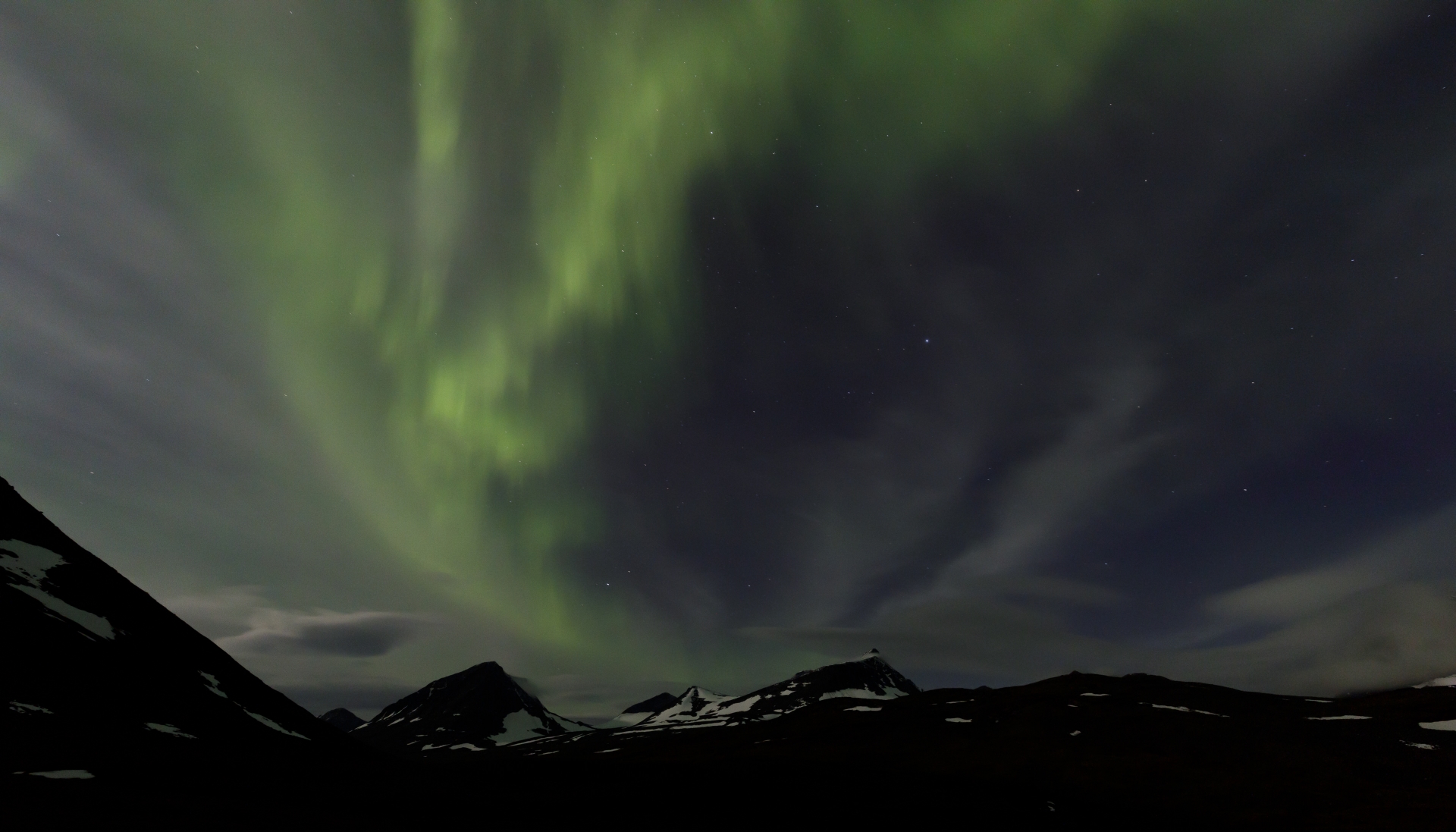 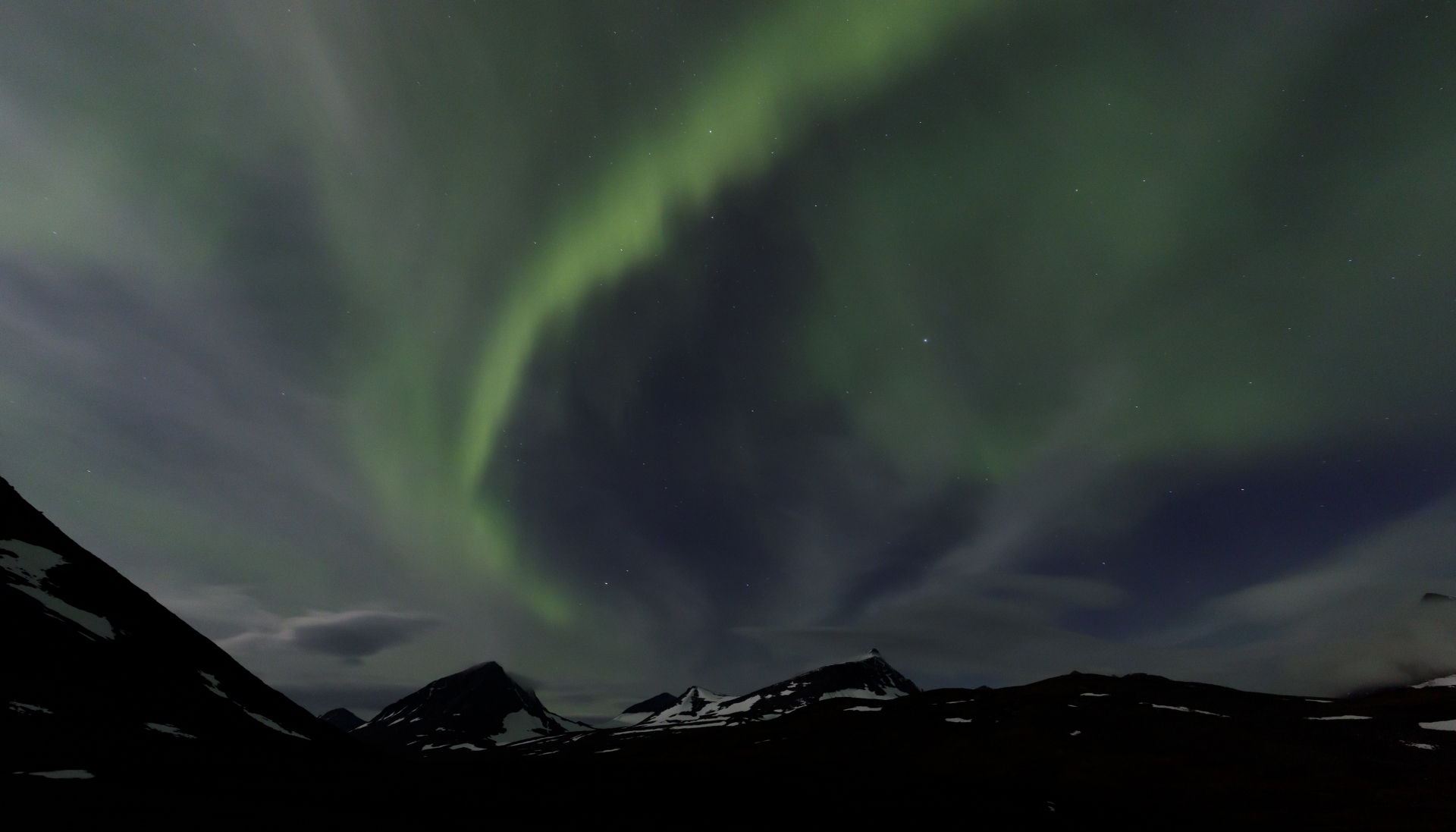 Polar lights can have different colors depending on how deep they penetrate the atmosphere and how energetic the penetrating particles are. Outside the polar regions, particles rarely penetrate deep into the atmosphere, but in the polar regions they do so regularly.
Green polar lights are formed at an altitude of about 100 km by excited oxygen atoms that collide with other particles. Red aurora borealis, on the other hand, are formed much higher at about 200 km altitude by excited oxygen atoms without colliding with other particles. For the excitation of nitrogen atoms much more energy is necessary, this color play from violet to blue can only be seen with very strong activity.
Polar lights can occur in many different forms. Frequently, arcs or bands can be observed – in fact, we have seen them several times during our journey. Meanwhile about 15 minutes have passed and actually the intensity is increasing again. The following picture is one of my favourite pictures and shows the moon behind the Raitatjåkka. 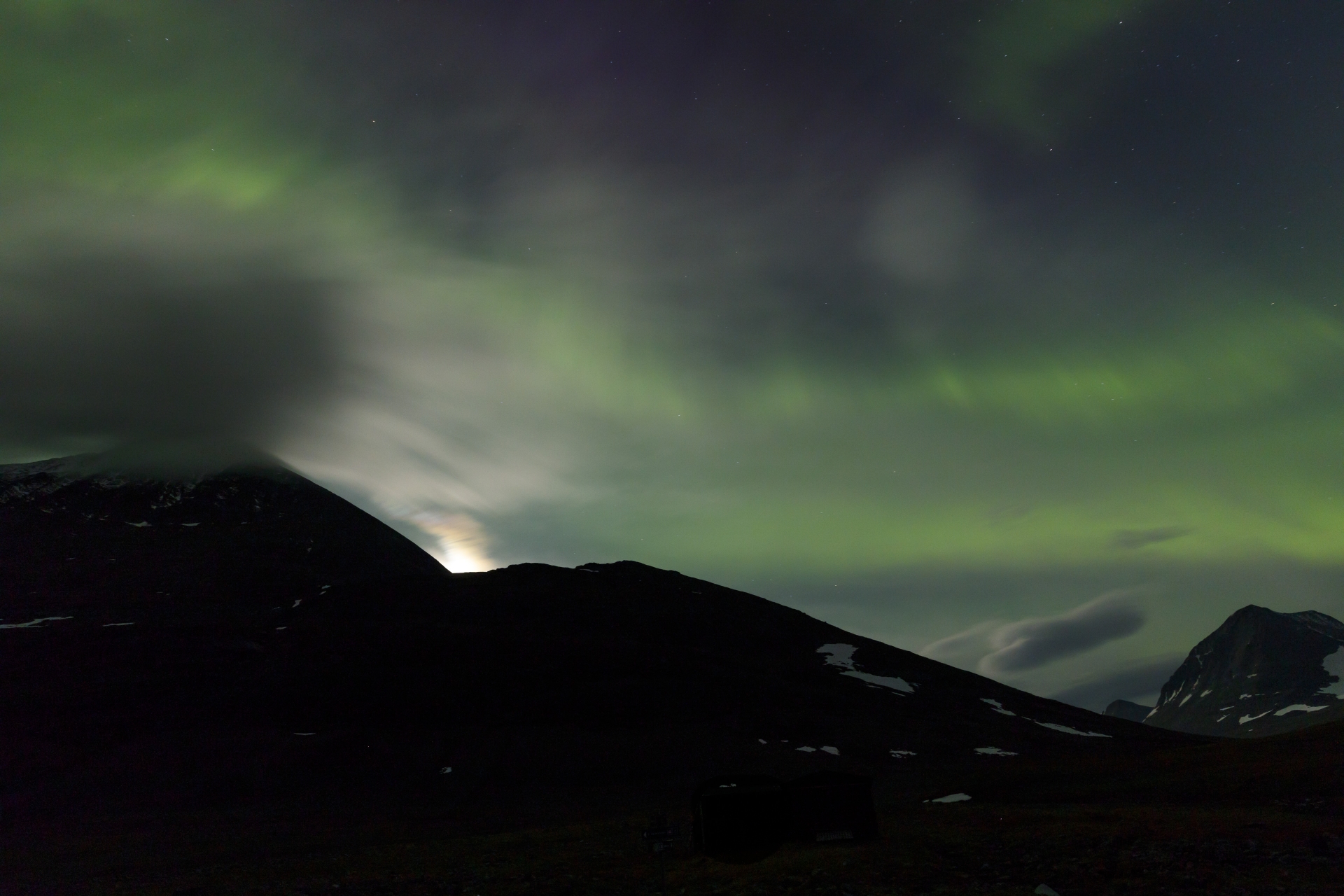 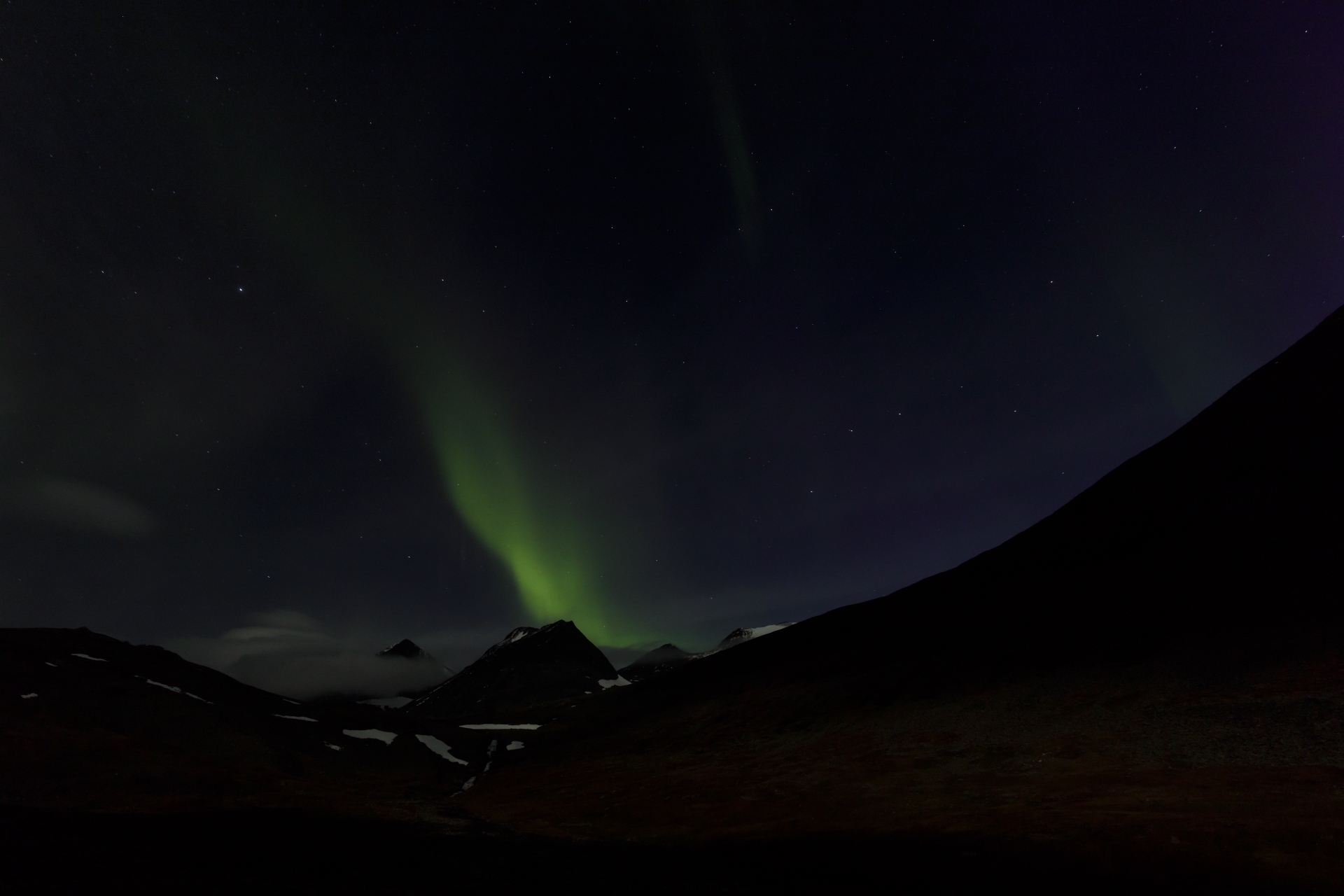 The next stage is represented by radiating arcs or bands. Alternatively polar lights can also appear as diffuse surfaces. Our enthusiasm reaches new heights – the Northern Lights are now green and violet! 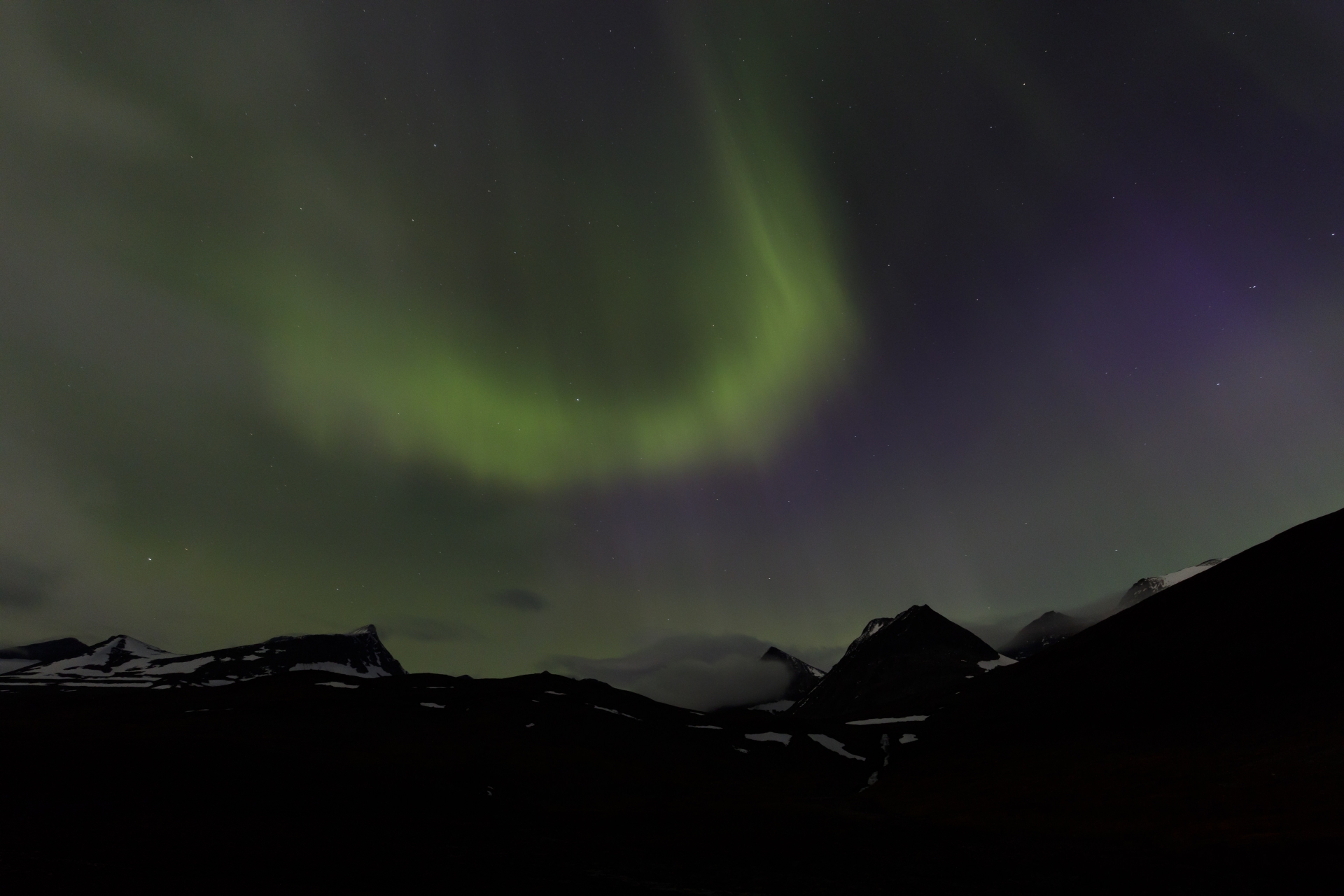 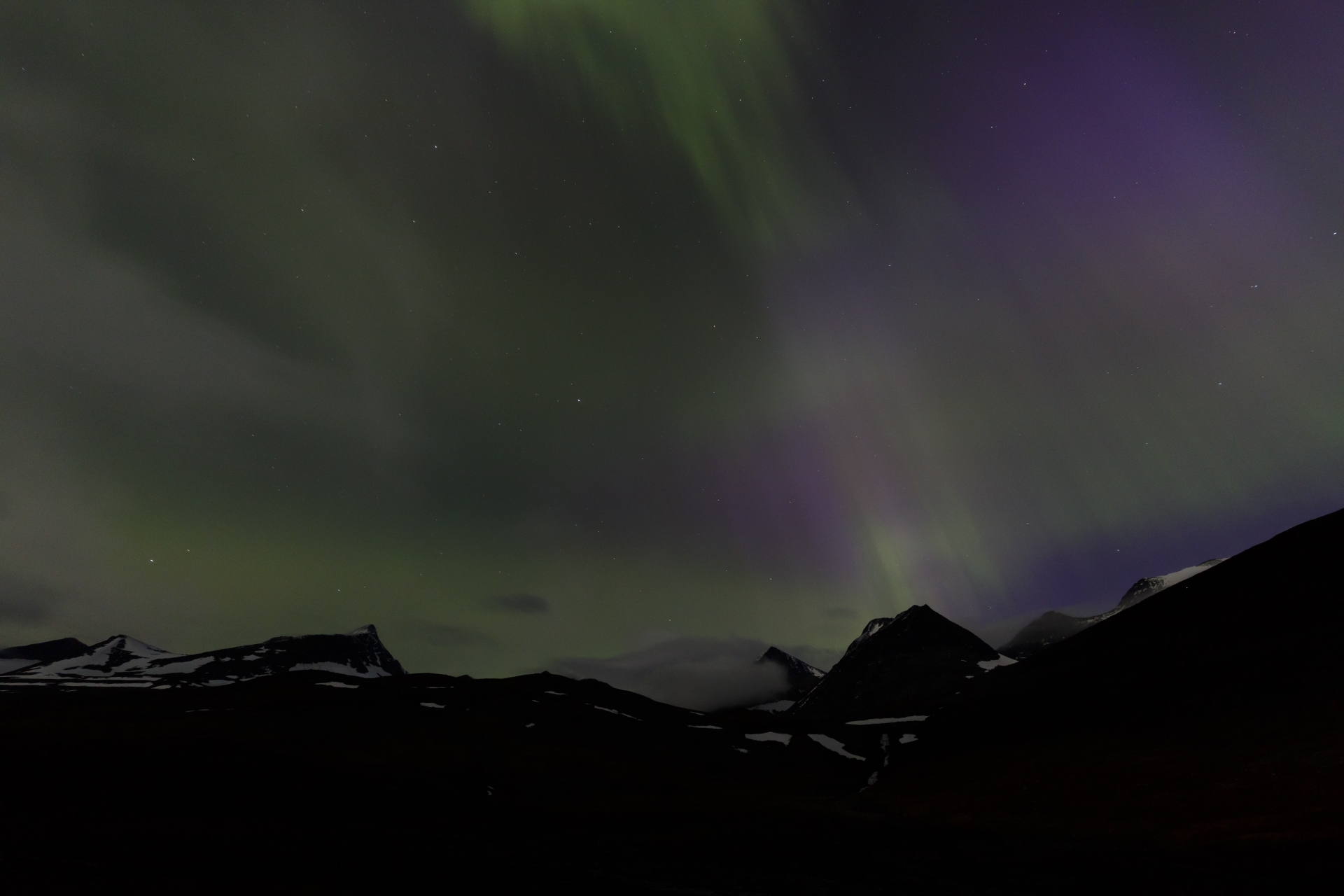 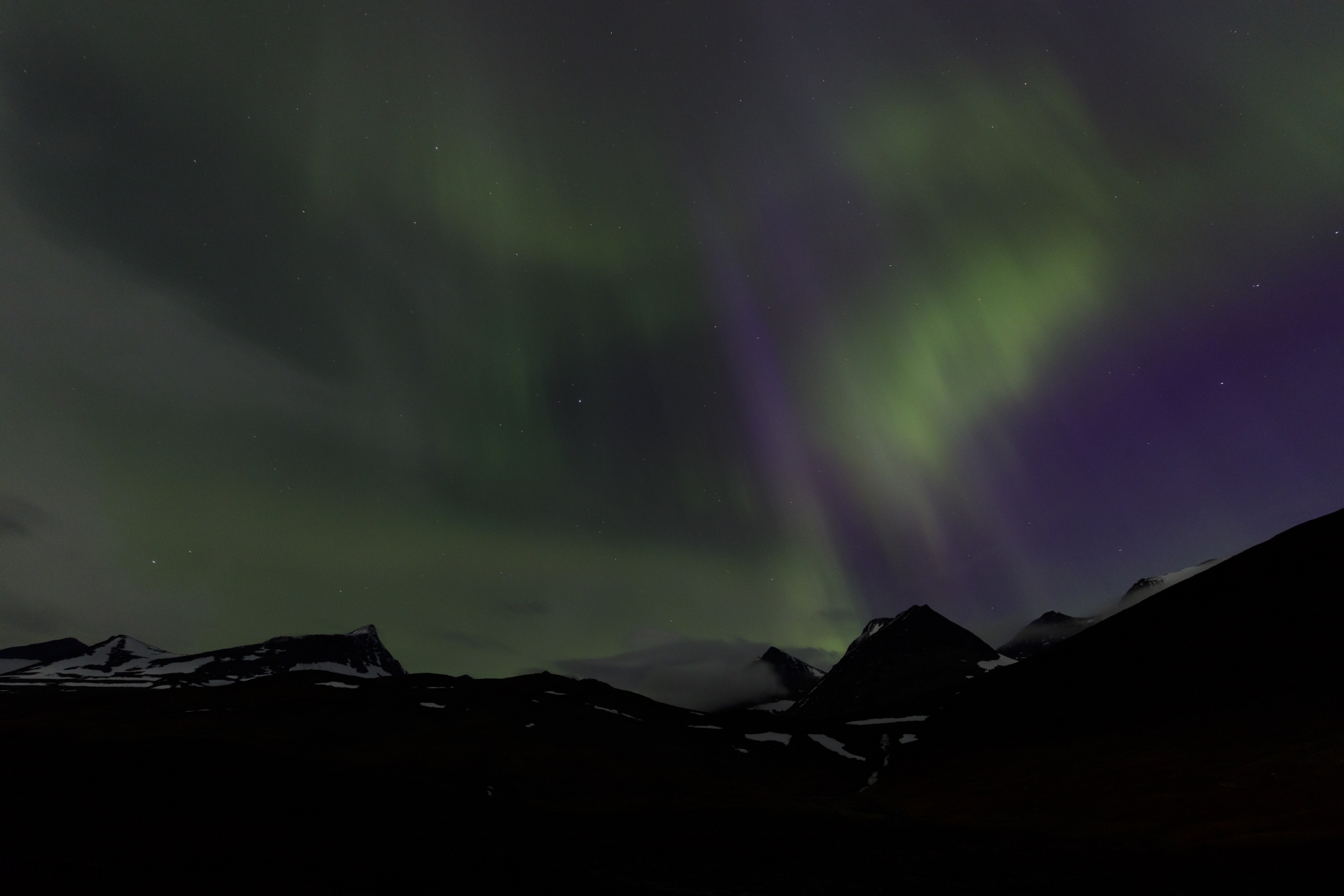 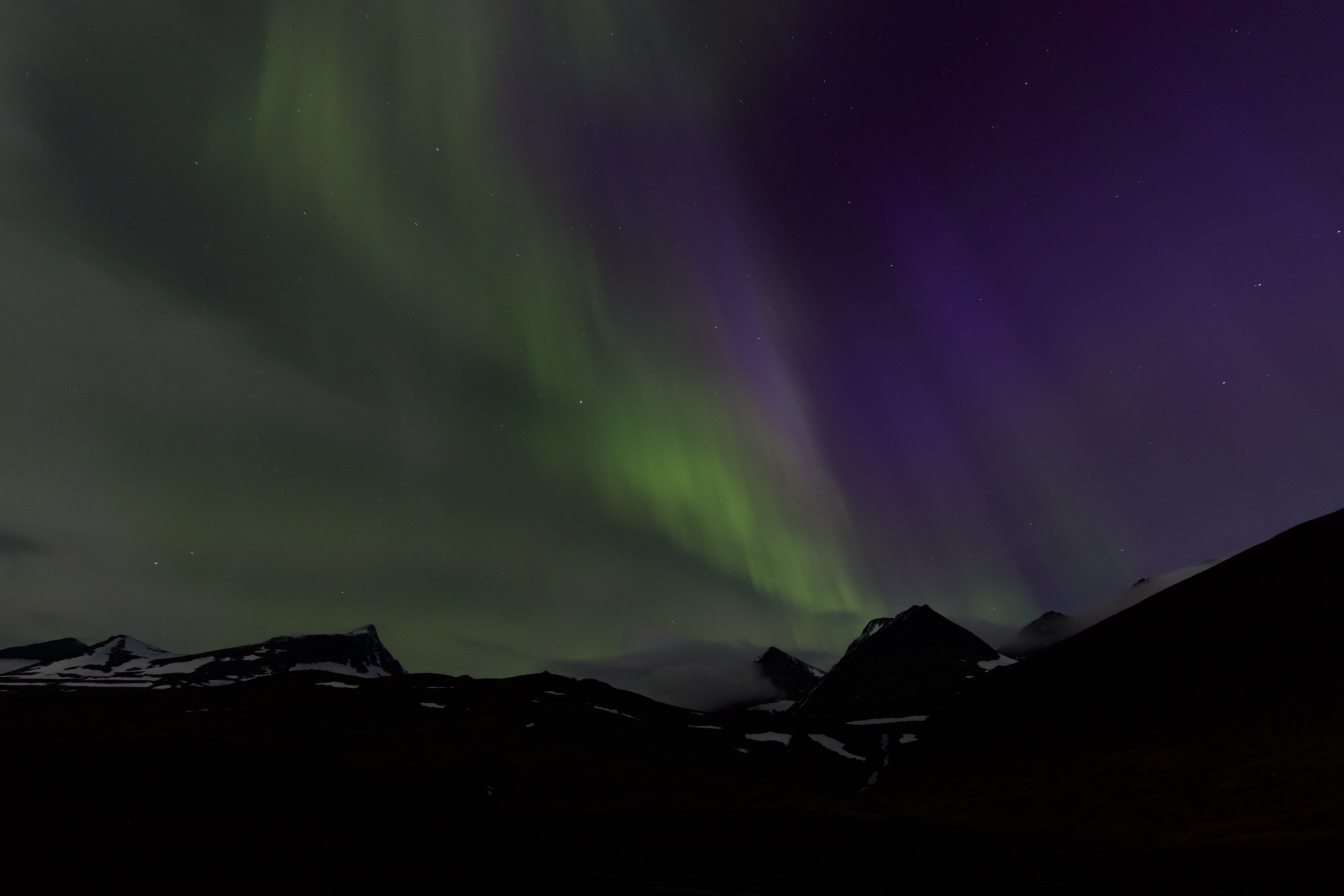 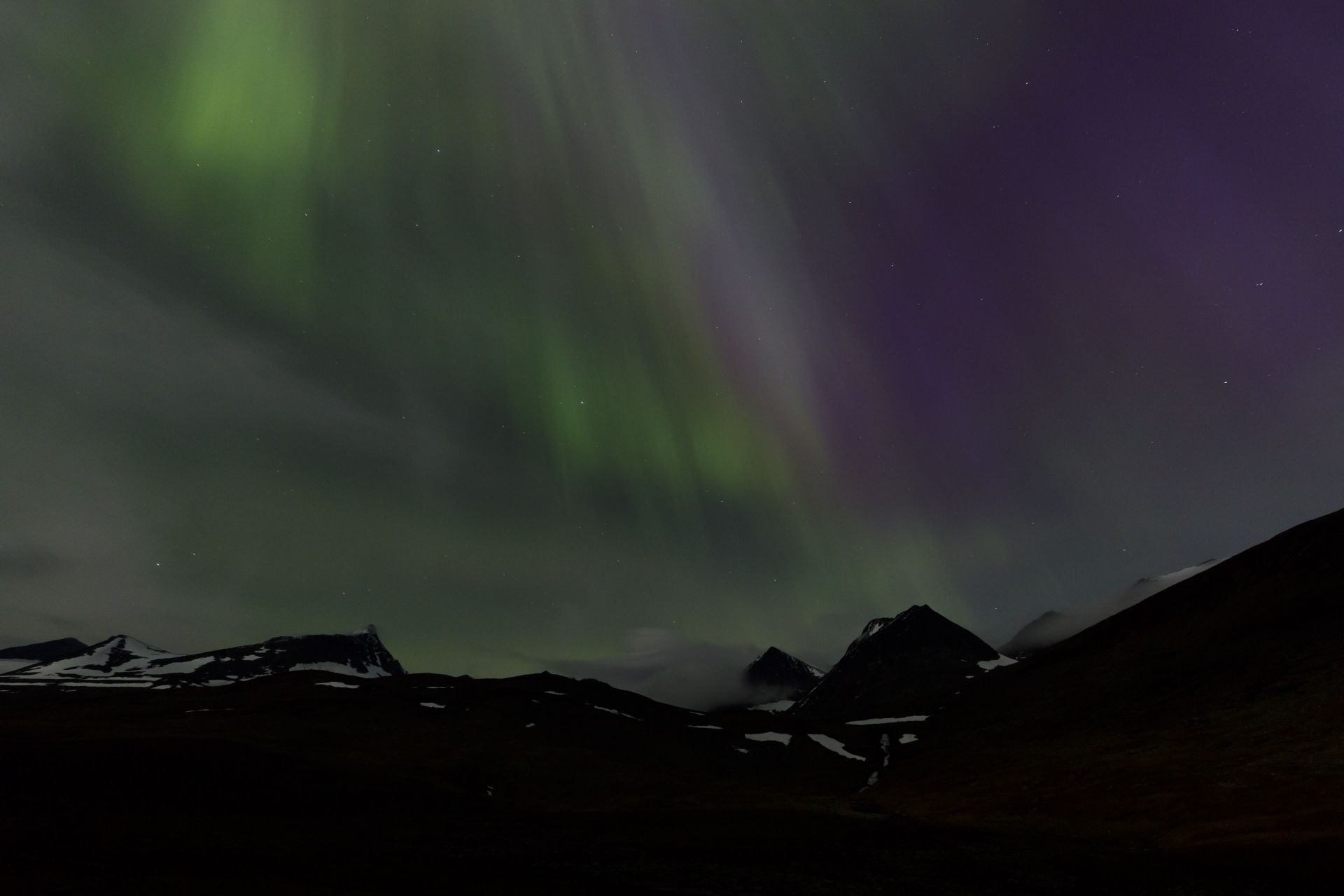 We now have a peak of activity, we see the northern lights sometimes in the west, sometimes in the east and then – suddenly – directly above us. A green/violet glow that takes up the whole sky above us and changes rapidly and pulsates. The spectacle lasted maybe a minute and remained undocumented.
Pulsating surfaces or arcs are the next level of the polar lights and the royal class represent the corona (those are ring-shaped rays) and the coveted “flaming”, pulsating rays directed into the zenith. We save this for another time 😉 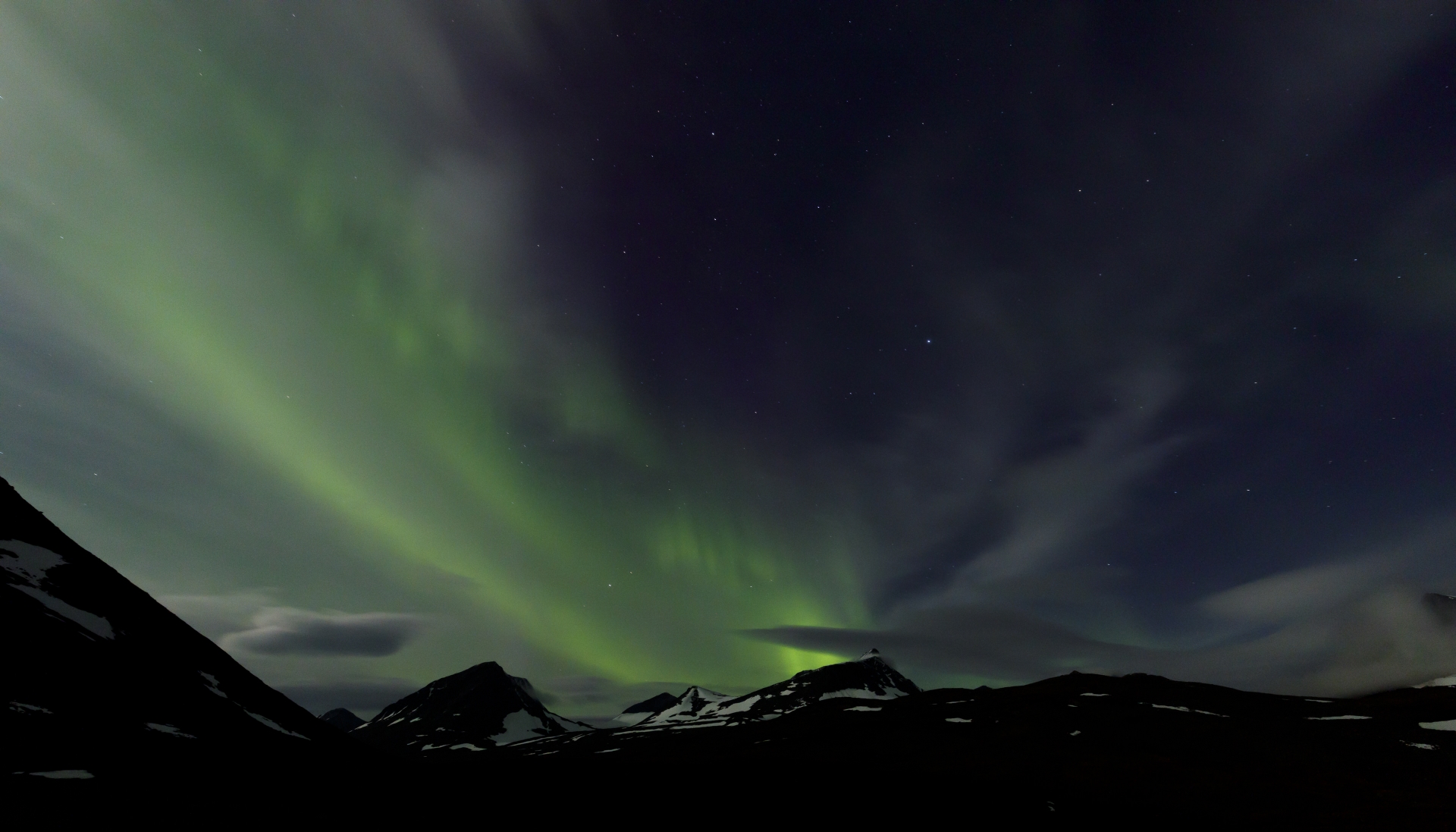 The last picture isn’t really good, but you can see a little red aurora – but that’s easier to see on the photo than live on location, where we could only guess. 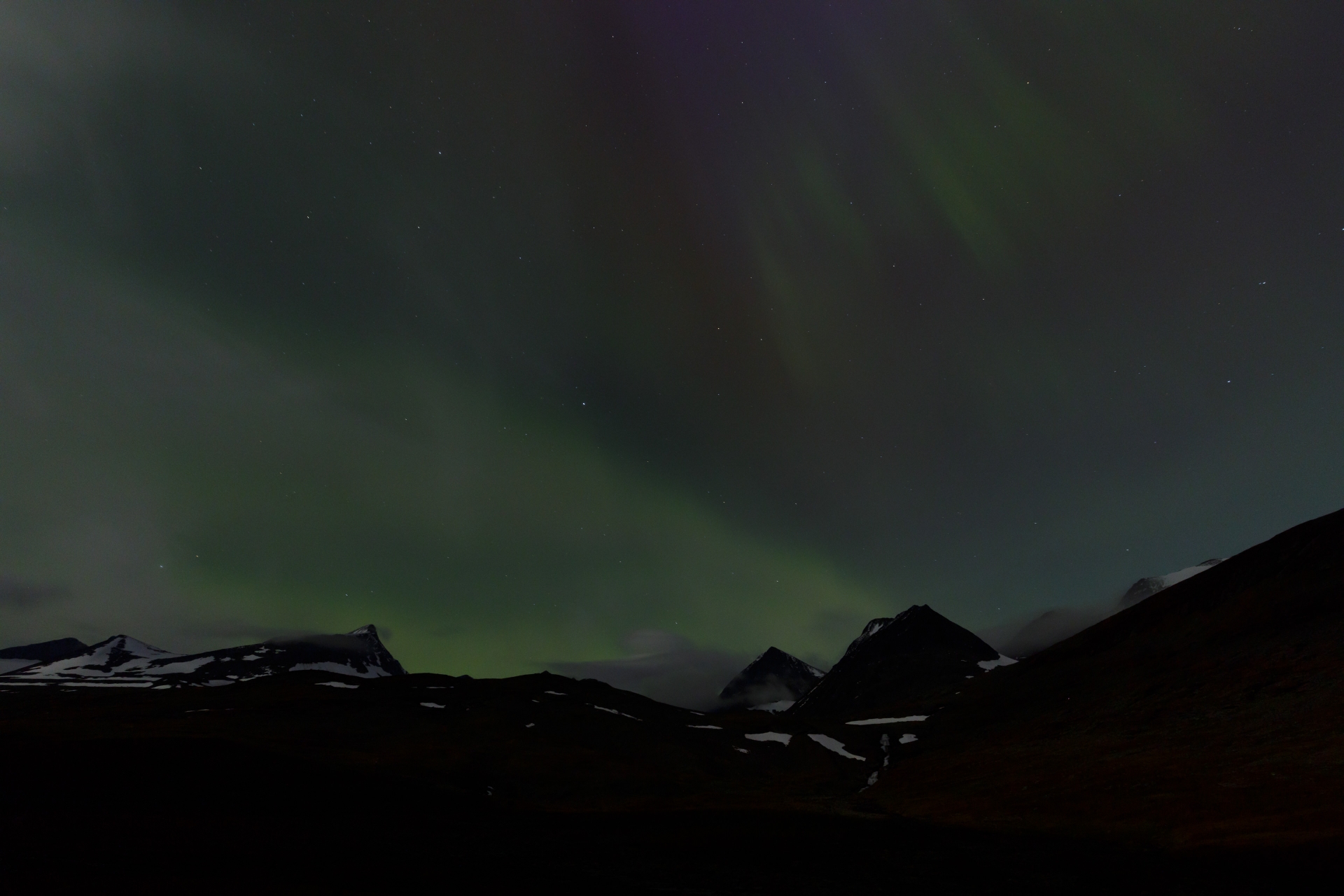 In the meantime we are already one hour outside and due to lack of exercise and sub-zero temperatures quite frozen. Boundlessly enthusiastic and intoxicated by this play of colours we get back to our warm sleeping bags and tomorrow morning we will continue to Vistasstugan.
Back to the previous entryTable of contents of this tourContinue to the next entry
7. September 2017/by Markus
https://lustwandler.at/wp-content/uploads/2018/04/Schweden2017_85A0544.jpg 2194 3840 Markus https://lustwandler.at/wp-content/uploads/2016/09/lustwandler-logo.png Markus2017-09-07 20:00:592018-10-29 21:04:52Night 4: Northern Lights / Aurora Borealis
0 replies