After two fantastic tours in the Swedish Fjäll, this autumn’s long distance hike takes us to the Norwegian-Swedish border area. Our tour starts in Ritsem and leads west on the Gränsleden until we reach the Nordkalottleden and follow it north. In this section our route runs alternately in Norway and Sweden. At Gautelisvatnet we leave the Nordkalottleden and walk through Caihnavagge and Narvikfjell to Riksgränsen. In total, our tour covers a distance of about 190 kilometres and took place from 1 to 18 September 2018.
The following map shows the total distance in “Basecamp”, you can also see how far the coverage of the Fjällkartan goes, the rest the OSM Summer II. 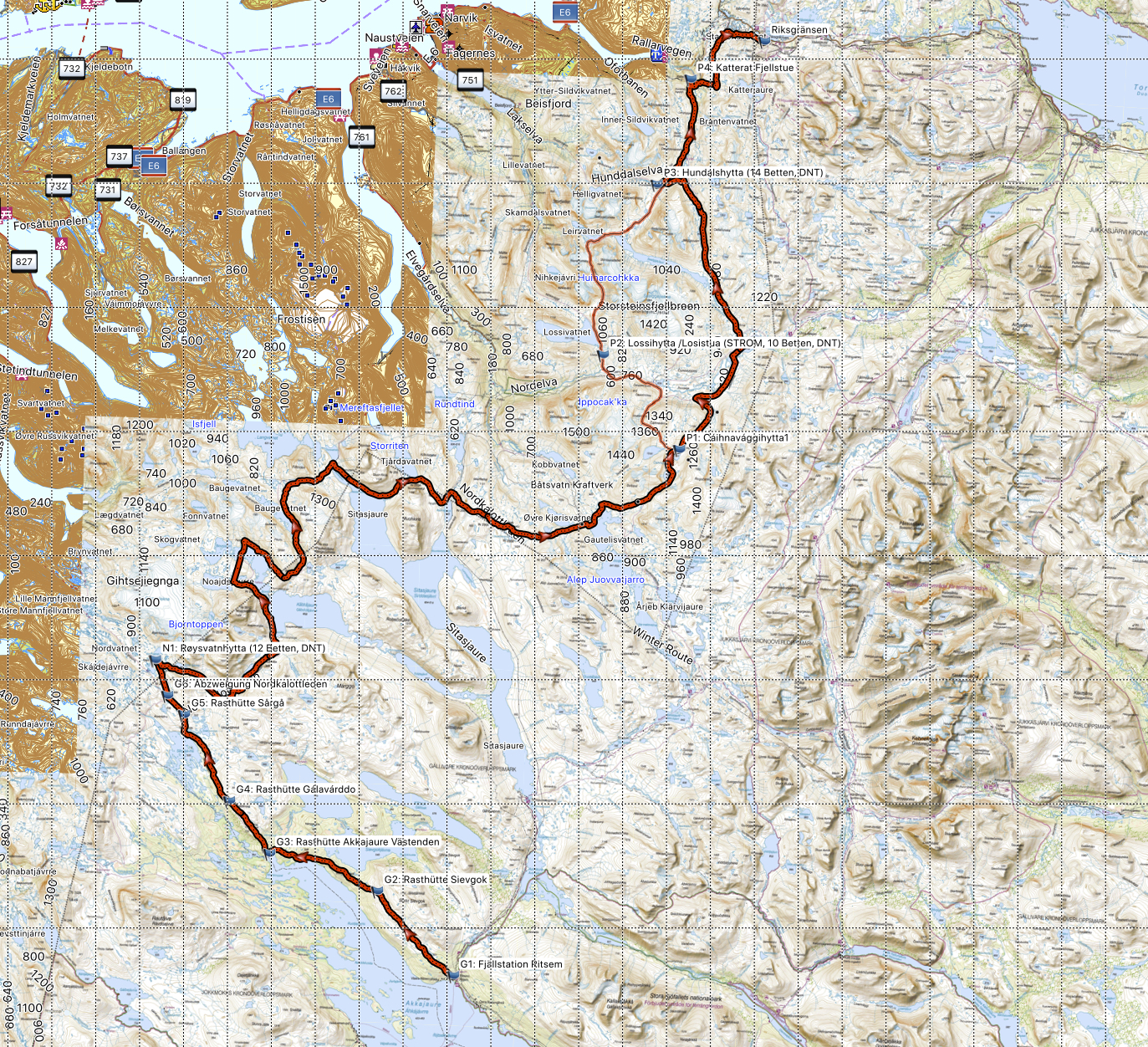 The Gränsleden (Sami Rádjebálges, Norwegian Grenseleden) is a path from the beginning of the 20th century (1920/1930) and was used by the local Sami when they moved into their summer camps. The trail runs 62 kilometres from Sørfjorden in Norway to Ritsem in Sweden. During the Second World War, it became sadly famous as a refugee route from Norway to Sweden, after which the trail was little used and fell into oblivion. It was not until 2007-2010 that it was marked and equipped with bridges and shelters (source: Wikipedia) as part of an EU Regional Development Fund project with the Sörkaitum seed settlement. On the Norwegian side, there are huts where you can also stay overnight, on the Swedish side not!
We only walk the Swedish part of the Gränsleden, which is about 42km (to the DNT hut in Norway), from our point of view from Ritsem there are the following resting huts (altitude meter ascent/descent; approximate values measured from the BD7 or Topo Summer II):
Ritsem – Røysvatnhytta 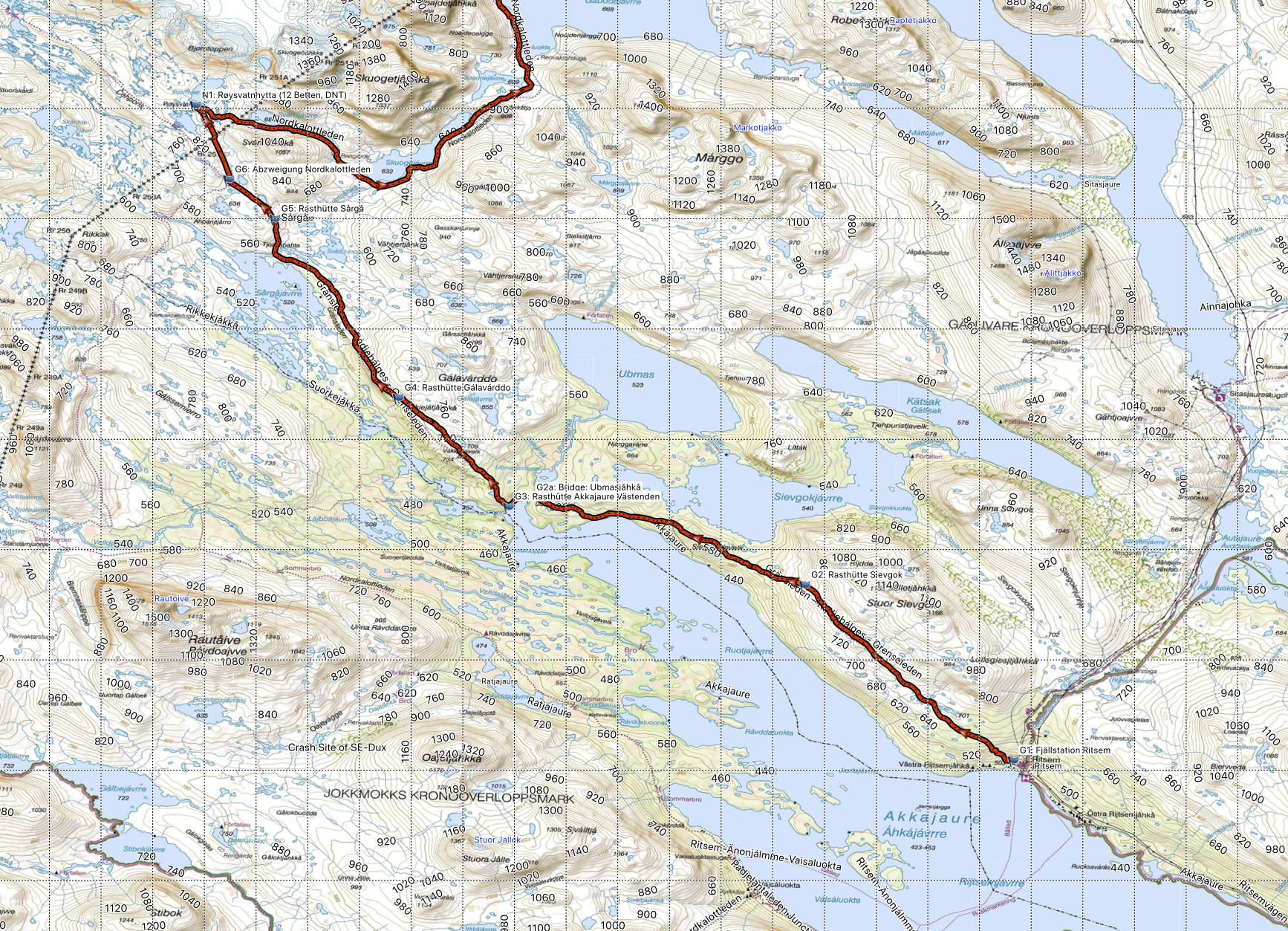 We would like to take this opportunity to draw your attention to a small trap: Røysvatnhytta, a large Norwegian DNT cabin with sauna, is located on the Nordkalottleden between the two lakes. And there is Røysvatnet, a very simple hut on the southern shore of the lake (closed on all sides and therefore better than the wind shelters on Swedish Gränsleden, but small and you sleep on the ground), which is situated on Gränsleden. So choose wisely!
The Nordkalottleden (Norwegian: Nordkalottruta, Finnish: Kalottireitti) is a long-distance hiking trail through Finland, Sweden and Norway. It is 800 kilometres long and starts in Kautokeino (Norway), crosses Treriksröset (the triangle of Finland, Norway and Sweden) and ends in Sulitjelma (Norway) or Kvikkjokk (Sweden) in the south. The trail leads partly along other well-known long-distance hiking trails (e.g. Padjelantaleden, Kungsleden), through national parks (Øvre-Dividal, Reisa, Abisko, Padjelanta) and through regions such as Sulitjelmafjell and Narvikfjell (source: Wikipedia).
We walk the section from Røysvatn via Pauro, Sitas and Skoaddejávri to Gautelisvatnet. There we leave the Nordkalottleden, which leads over the Gautelishytta [sauna!] then over Hukejaure into the Tjäktjavagge to the Kungsleden between Sälka and Singi. We keep our course to the north and cross the pass to Caihnavaggehytta.
Røysvatn – Caihnavaggehytta

The third section of our route should lead through Storsteinsfjellet and Narvikfjell. We had chosen a spectacular route with a view of the glaciers.
But the weather has put a spoke in our wheel here. We fought our way through the block field at borderline wind speeds and arrived at Caihnavaggehytta with the last light of the day, but after the weather didn’t look inviting the next morning we descended to Cunojavrre to avoid getting stuck at the top. From there we went to Hunddalen and then – as originally planned – to Katterat (a second attempt to go from Hunddalen towards Lossi also failed due to the weather):
Caihnavagge – Katterat 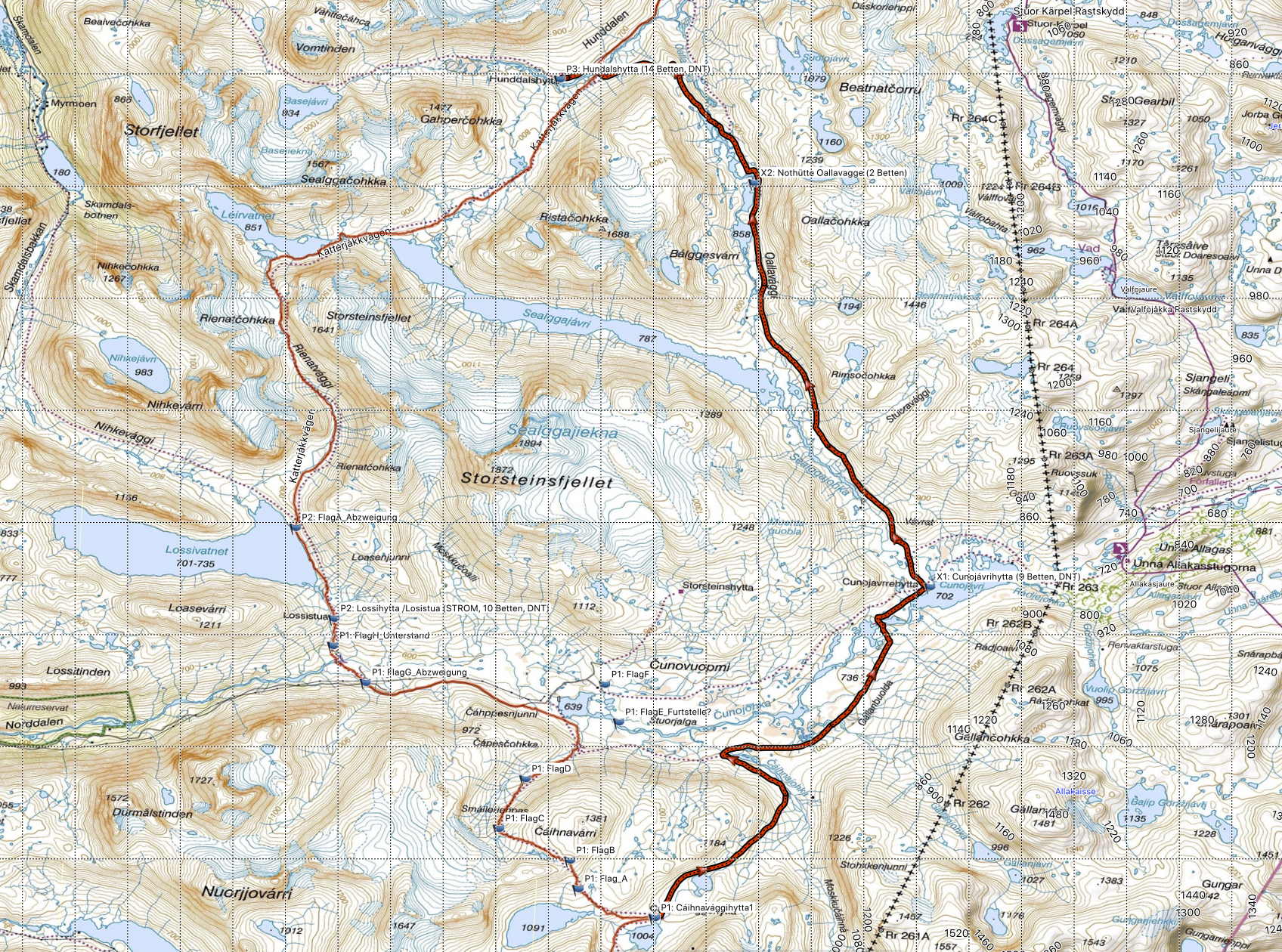 Now that we still had a little time, we didn’t get on the train in Katterat, but went a section of the Rallarvegen (Rallarveien, Swedish Rallarleden). This is a path which was laid out for the construction of the Ofotbanen in the years 1890 to 1903, then decayed and restored around 1990 and made accessible to hikers (source: Wikipedia). The Ofotbanen are the Norwegian part of the railway line Luleå to Narvik, which was built for ore mining (Gällivare and Kiruna). We walked about 12 km from Katterat via Bjørnfjell to Riksgränsen, the Swedish border station, and from there we took the train to Abisko. 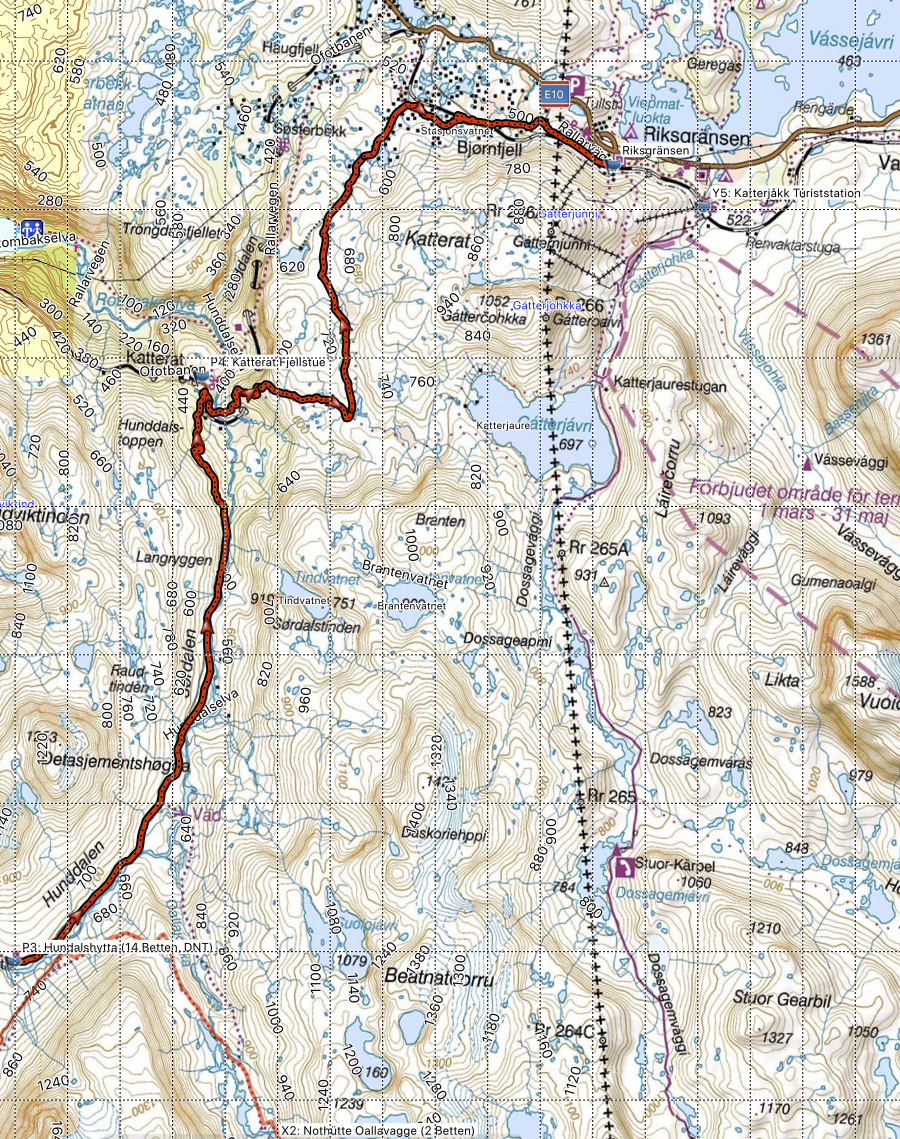 Our tour started in Sweden in Ritsem and ended again in Sweden in Riksgränsen. In Abisko we then visited Abisko östra, the Samicamp and the Njullá on a rest day, a tourist program we never managed during the three previous visits.
In contrast to the last autumn tour we were again on tour with a tent this time, due to the lack of huts the Swedish part of the Gränsleden can only be covered with a forced march of more than 40 kilometres without a tent and also in Norway the distances are sometimes quite long. On our route there is no possibility to buy more food, so we carried our complete food along from the beginning. The only possibility for a shopping in between comes quite late with a “rest day” in Cunojavvre and from there a day trip to Unna Allakas in Sweden.
The Norwegian DNT huts on our route are locked and you need a DNT key. You can have this key sent to your home country as a DNT member (and then keep the key). The Christ Child already brought me such a great key for Christmas 2017, I am just a lucky guy 🙂
The Norwegian huts we visited were all great: comfortable, clean, with sawn and chopped firewood, partly with comfortable armchairs and panorama windows. This time I photographed some of the huts from the inside, you can find the pictures at the corresponding days.
Our tour is covered by two mountain maps together: the first part by the mountain map BD7 Sitasjaure-Ritsem and the second part by the mountain map BD6 Abisko-Kebnekaise-Narvik. Sweden has made the data underlying the mountain maps publicly available (Lantmäteriet: http://www.lantmateriet.se/en/Maps-and-geographic-information/Maps/oppna-data). They can be viewed online at https://kso.etjanster.lantmateriet.se/?lang=en (switching from topo to fjällkartan). Based on these data you will find at http://bengt.nolang.se/kartor/fjallkartan excellent formats in form of high resolution JPGs and file formats for GPS devices. This is also the source for the screenshots on this page. I also create our daily maps in this way. Simply copy screenshots of the corresponding section into a Word document and then print it out in colour. The respective sheet of the day (folded in an A5 transparent cover) is quickly at hand and just as quickly stowed away again and you don’t have to treat it as carefully as the BD6.