Silence. Some birds are singing. An intense forest aroma. The path at the beginning is relatively wide, the roots of the Japanese sickle firs run crisscross. Again and again the path is terraced with boards, although it is not really steep, probably a tribute to the extreme rainfall. We put one foot in front of the other and are happy about every “foreign” plant we catch sight of. On the first stretch, the forest is not so dissimilar to our forests, but the higher we get, the more it turns into a tropical mixed forest and we can’t get out of being amazed. 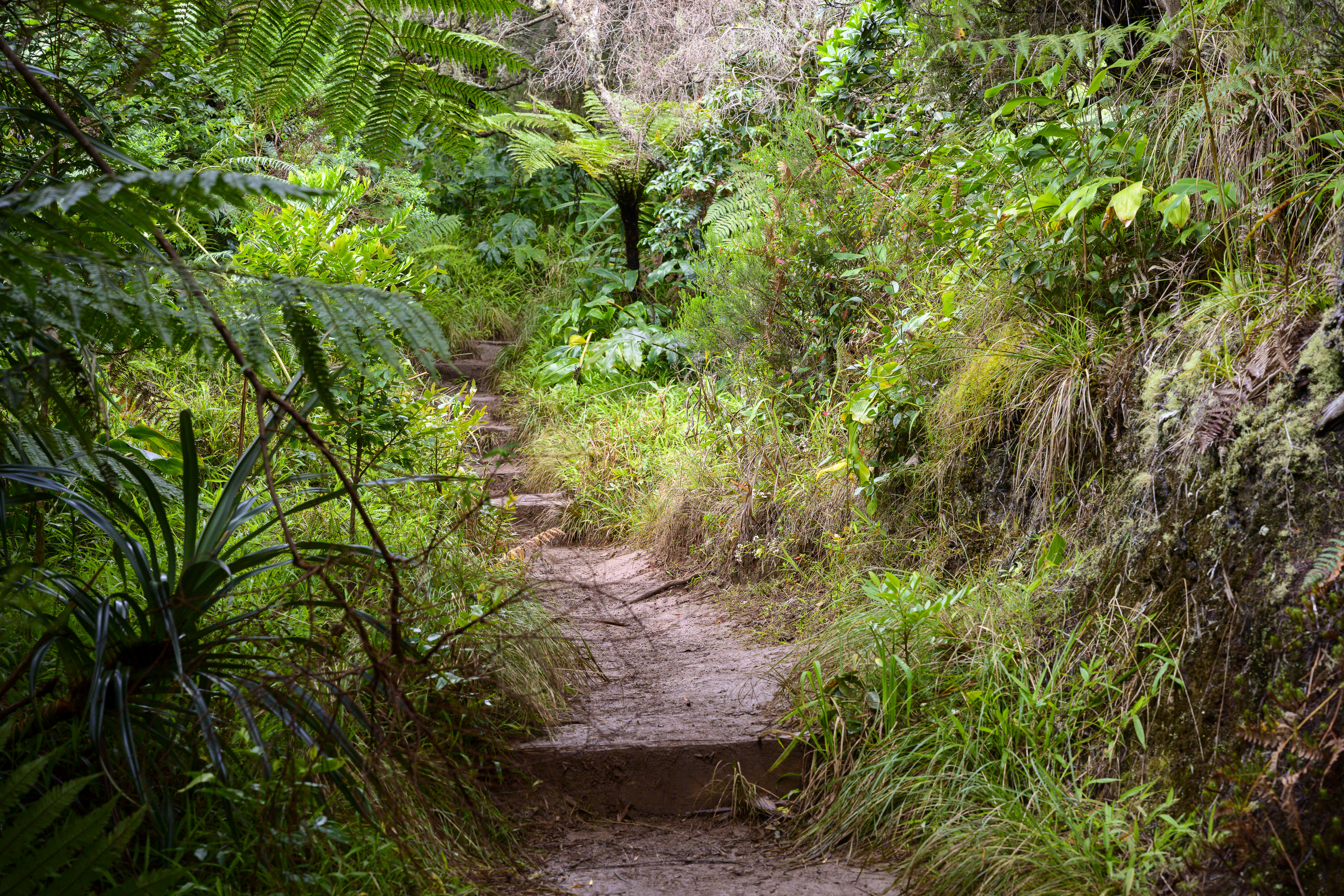 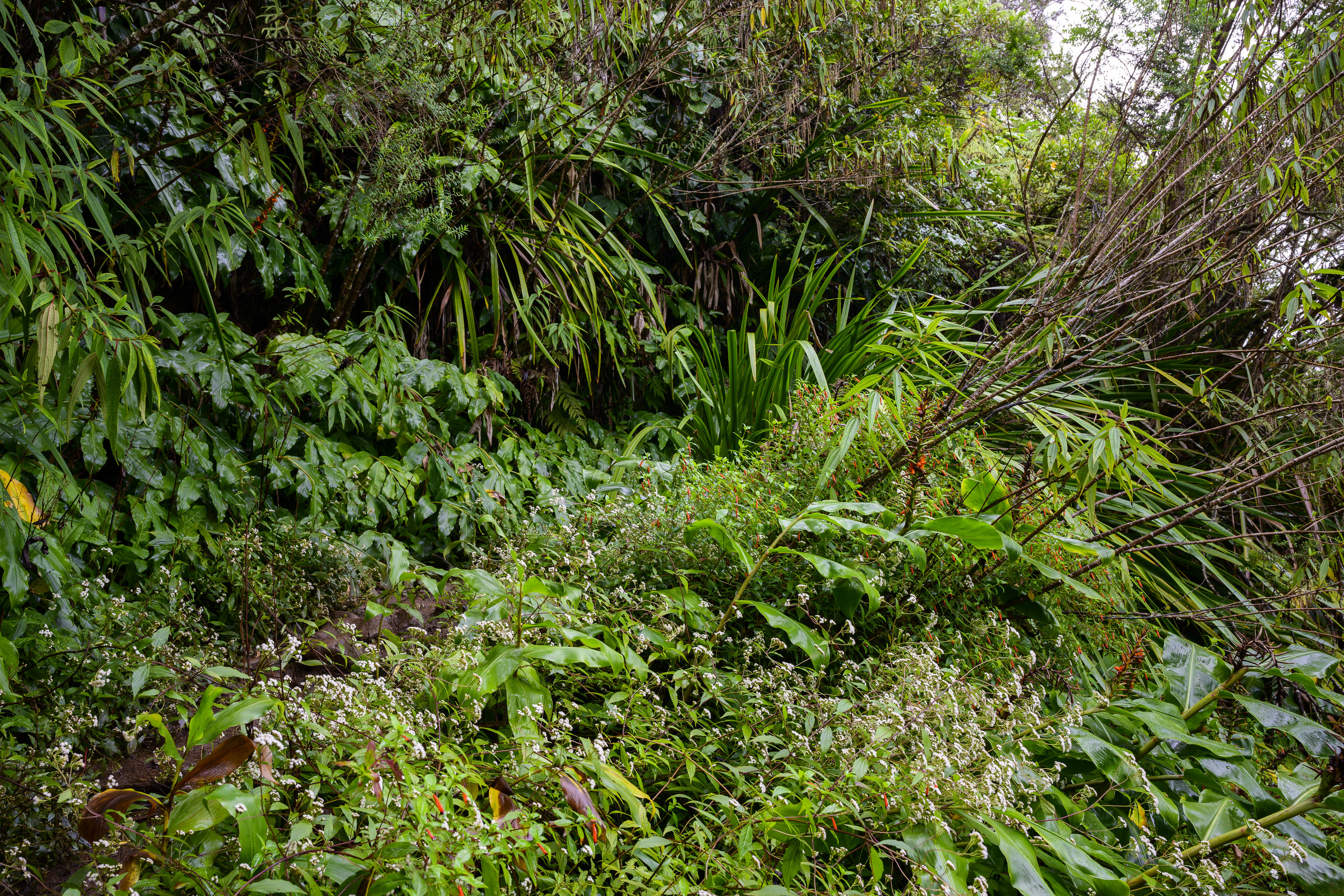 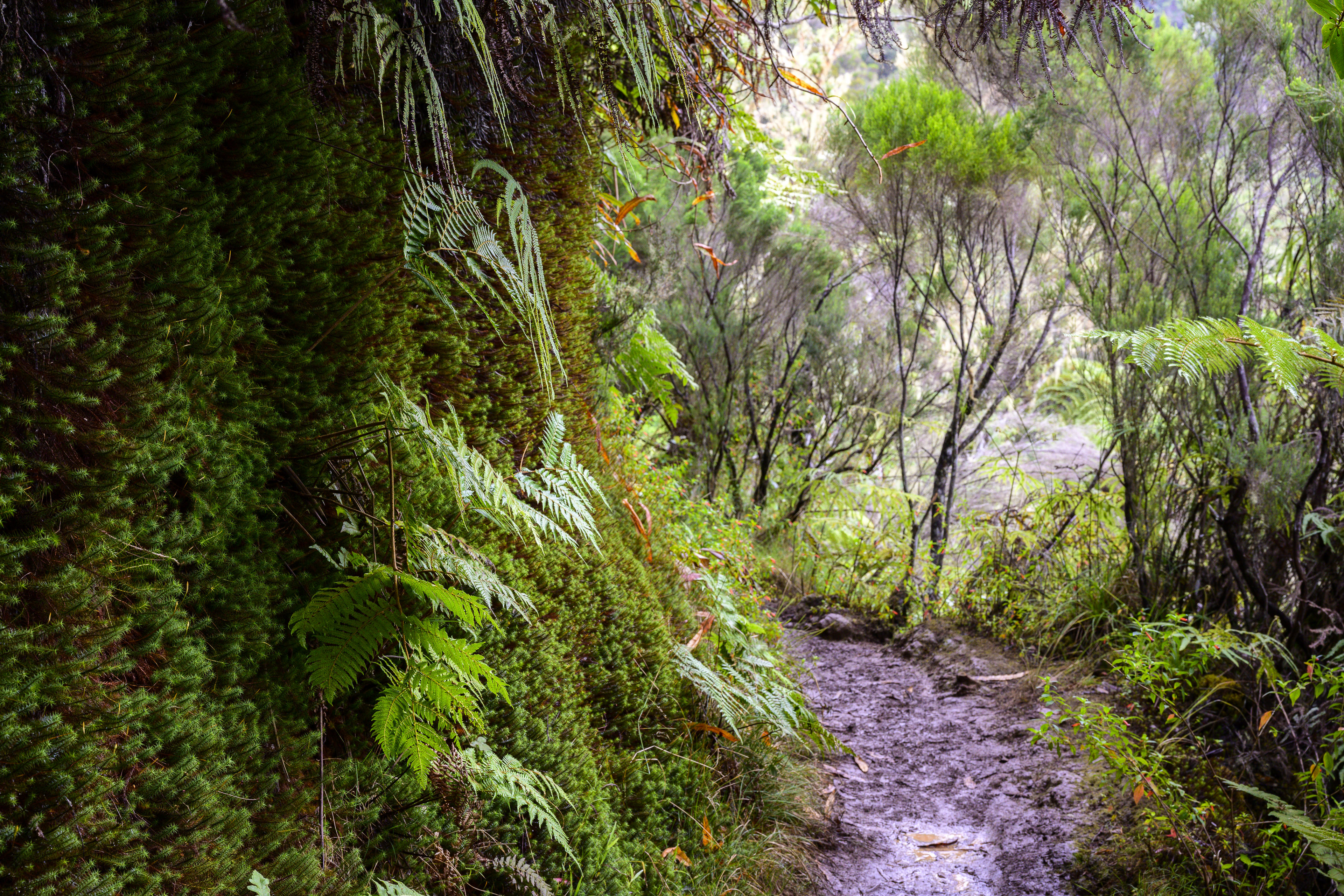 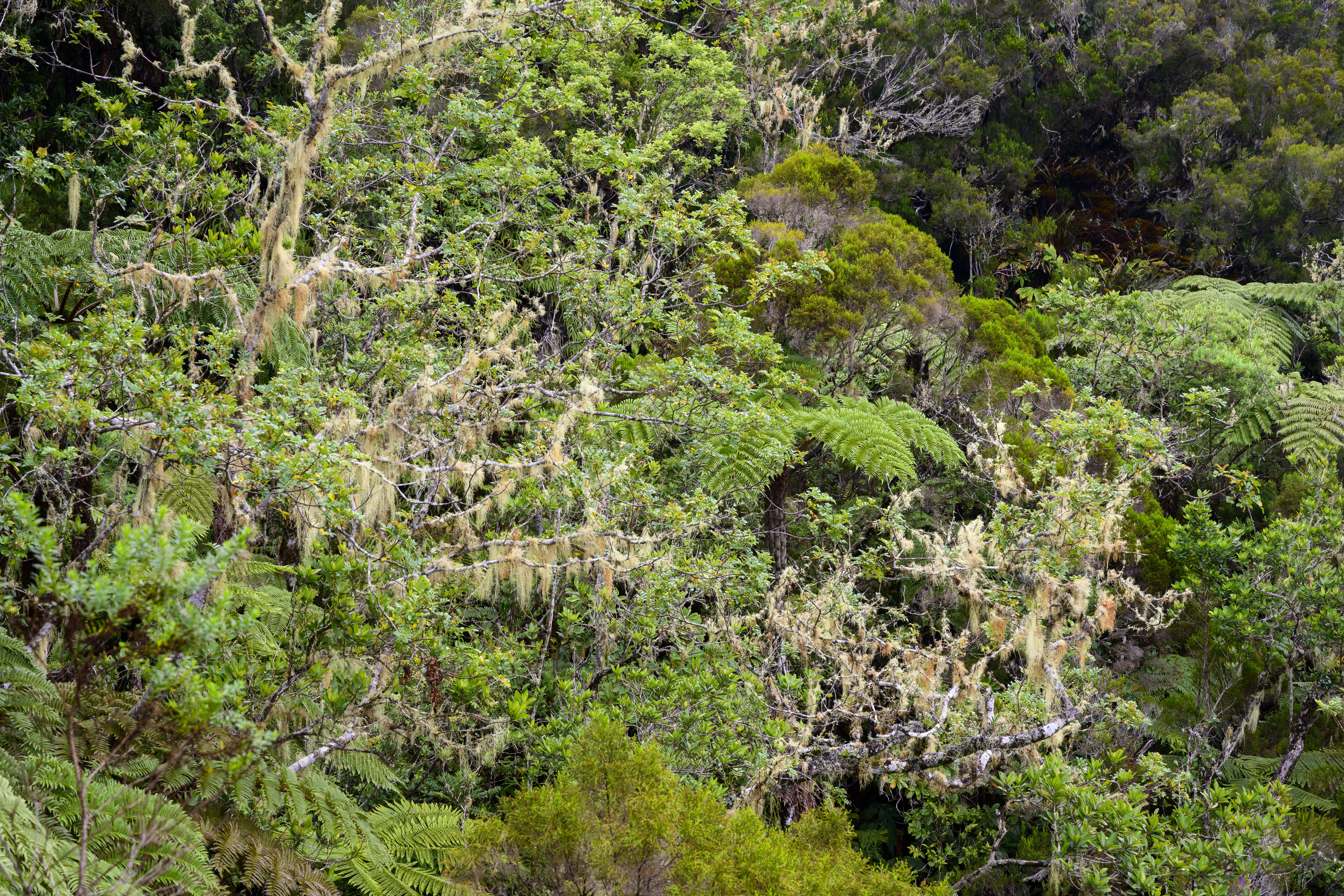 After the first hour we are just happy! Just married ? and traveling in a landscape that totally inspires us. In such a climate zone we – as fans of the north – have never been on tour. We have seen many pictures beforehand and suspected that this could be something for us, but to feel it with all our senses is something completely different. 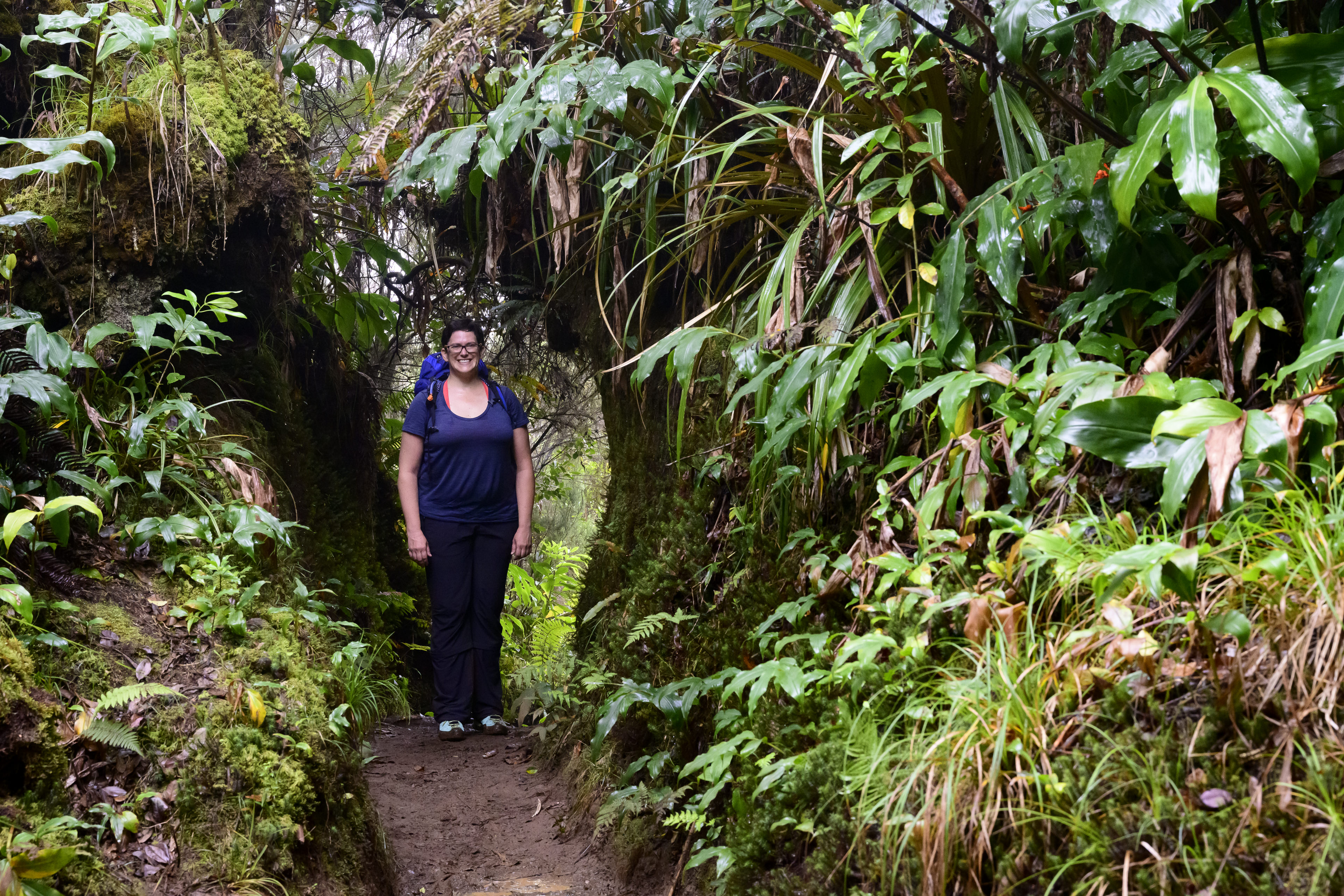 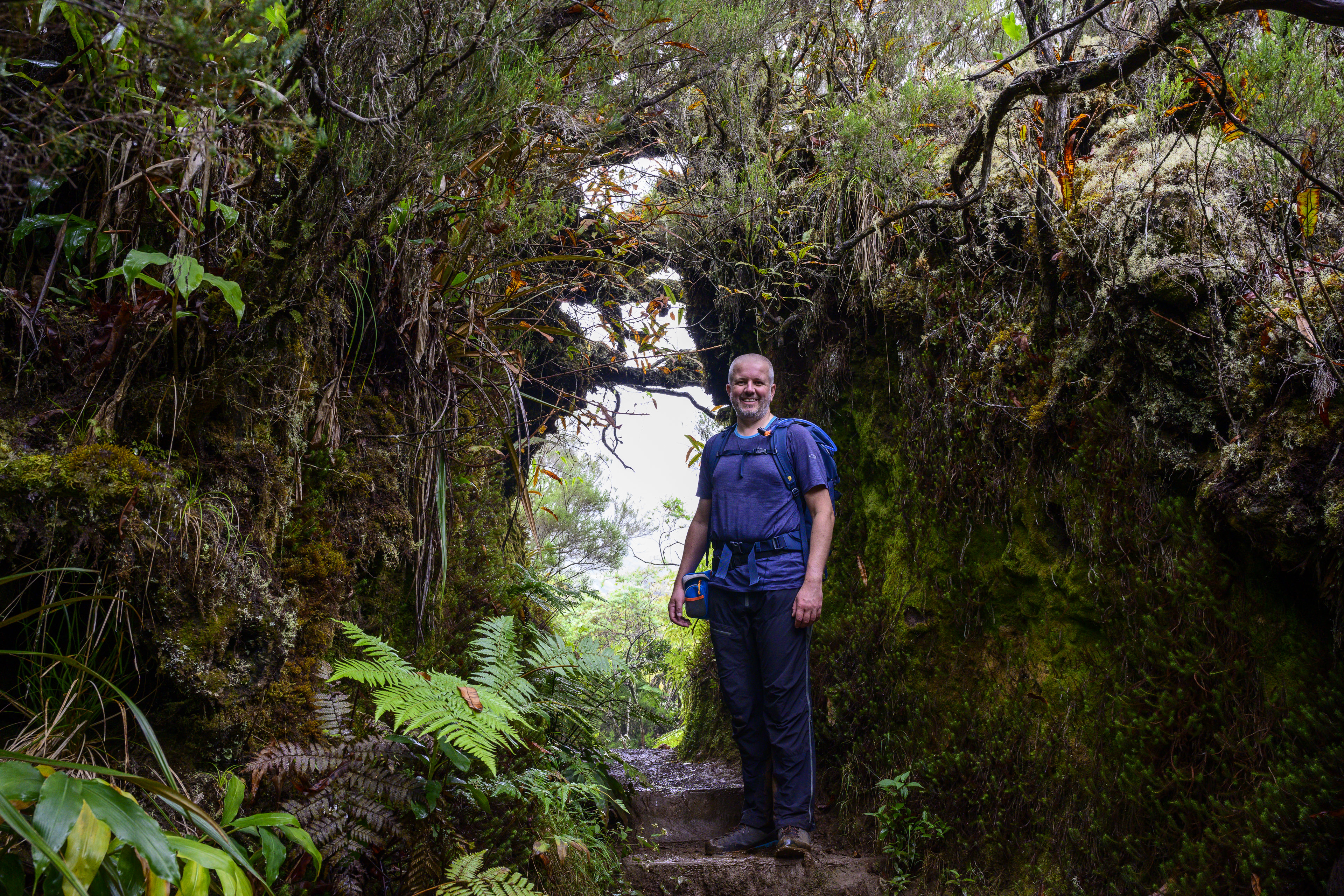 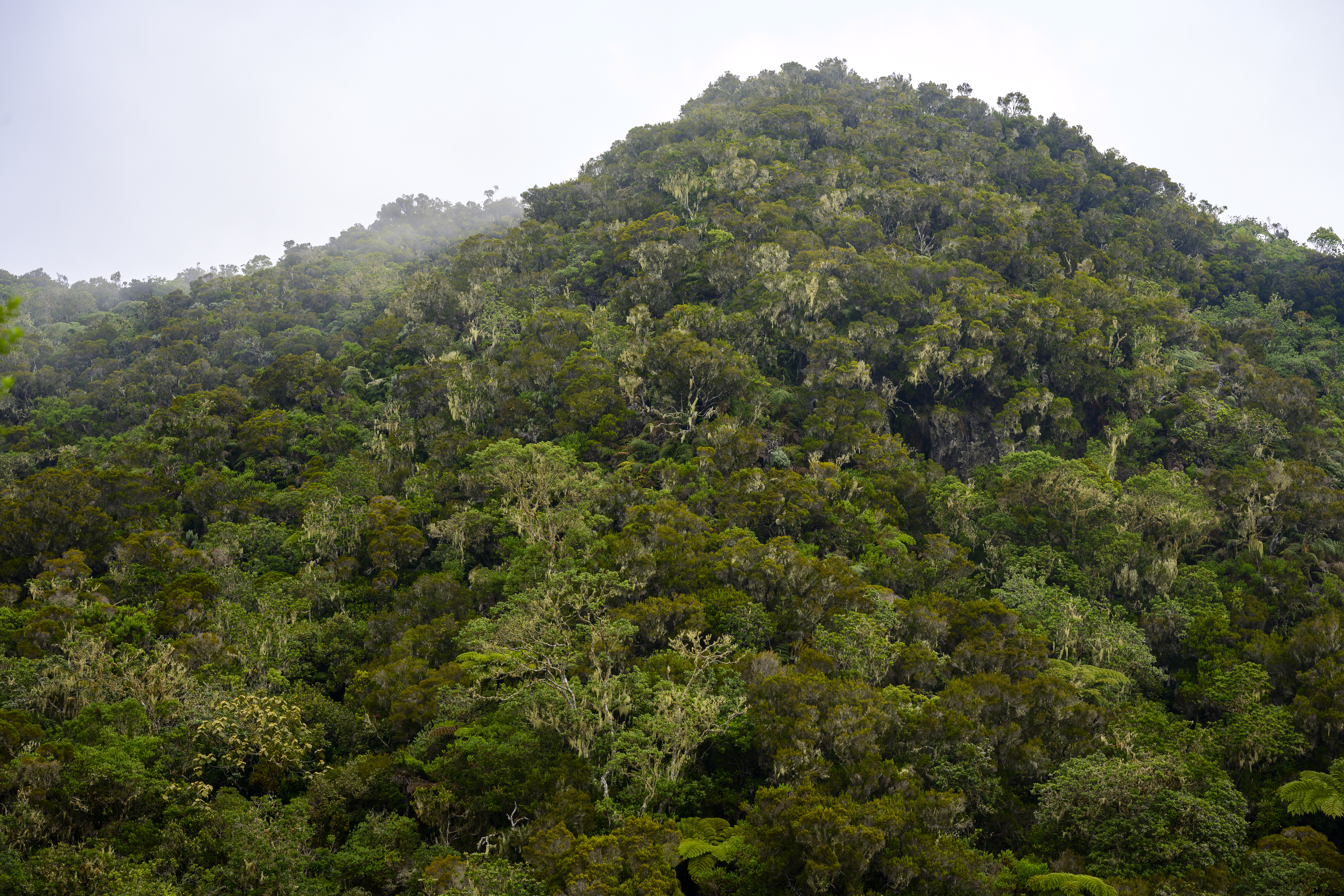 On the narrow path we go steadily upwards. To the left and right of the path there is often a steep slope or hillside. However, we never had the feeling that we were exposed on the way – fortunately, this feeling does not arise due to the dense vegetation, but nevertheless you should not fall off the path! ? 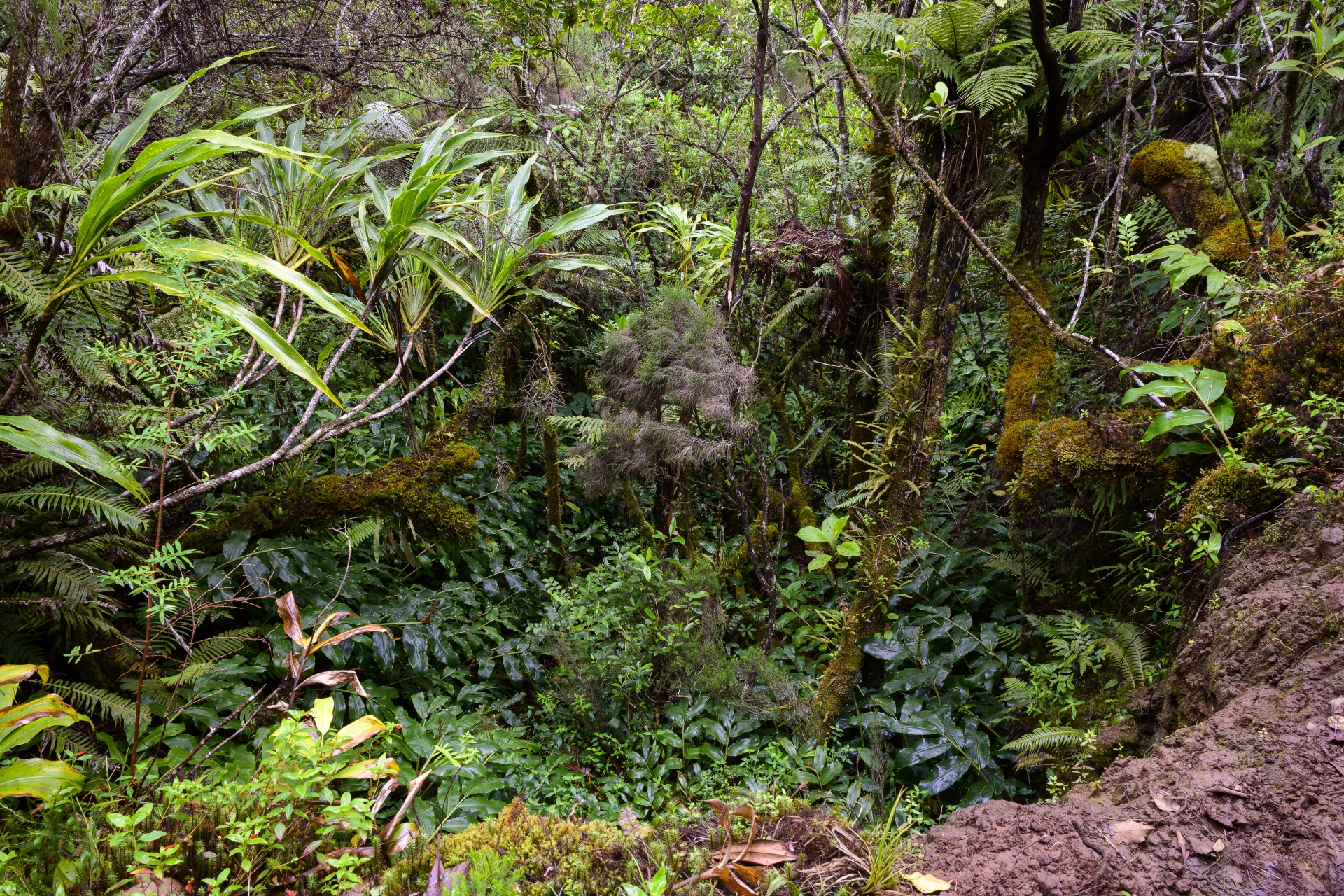 Dichter Bewuchs an steil abfallenden Hängen, © Markus Proske — NIKON Z 7, NIKKOR Z 24-70mm f/2.8 S, 24mm, 1/50s, Blende 11, ISO 900
Basically, the vegetation on Reunion is difficult to divide into areas. The island has over 200 microclimatic zones. Thus, as one climbs to the gîte, one changes from rather dry parts of the forest to very humid rainforest, and sometimes shortly thereafter back to a drier part – this sometimes takes place over a few hundred meters and without much change in elevation.
The tropical mixed forest that is so special in Reunion is called Fôrets de bois de couleurs (roughly “colored wood forest”) because of the many different colors of the trees. The forest needs regular humidity, in the humid east of the island it starts already at low altitudes, in the dry west only from 700 m altitude. A distinction is made between the Fôrets de bois de couleurs des Bas (lowlands) and the Fôrets de bois de couleurs des Hauts. The latter are the rainforests of the high altitudes, these are much denser, the trees grow less high and are strongly colonized by mosses and lichens. In the east, you can find them in some cases already from 700 m, in the west only from 1,100 m altitude.
Started at the Mamode Camp hikers’ parking lot at 1,200 m altitude, we have now passed the 1,500 altitude mark. The clouds hang low in the forest, the air is extremely humid. Two very typical plants of the tropical mixed forest, which you will see on many pictures, we would like to introduce to you now: Tree ferns and bearded lichens. 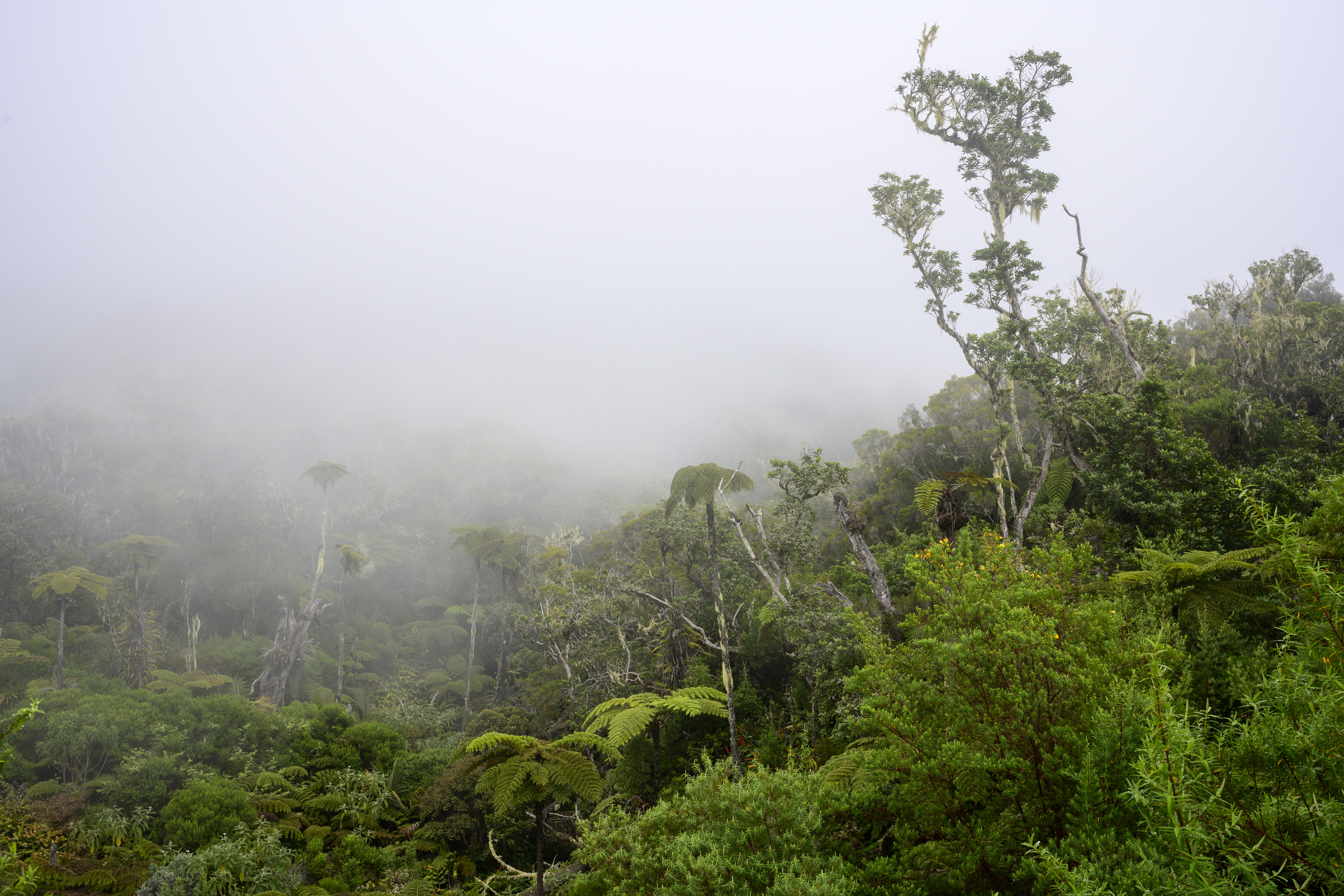 In the meantime we took a half-hour break on a – very wet – tree trunk and at first we only heard a few lively birds and then, when they lost their shyness, we also saw them. Actually, we wanted to buy sandwiches at the airport for the snack – but unfortunately we completely forgot about that due to the complaint of the trekking poles that did not arrive. At least we have already filled our drinking bladders while waiting for the luggage and that was important, because here it is humid, but there is no running water on the whole way. 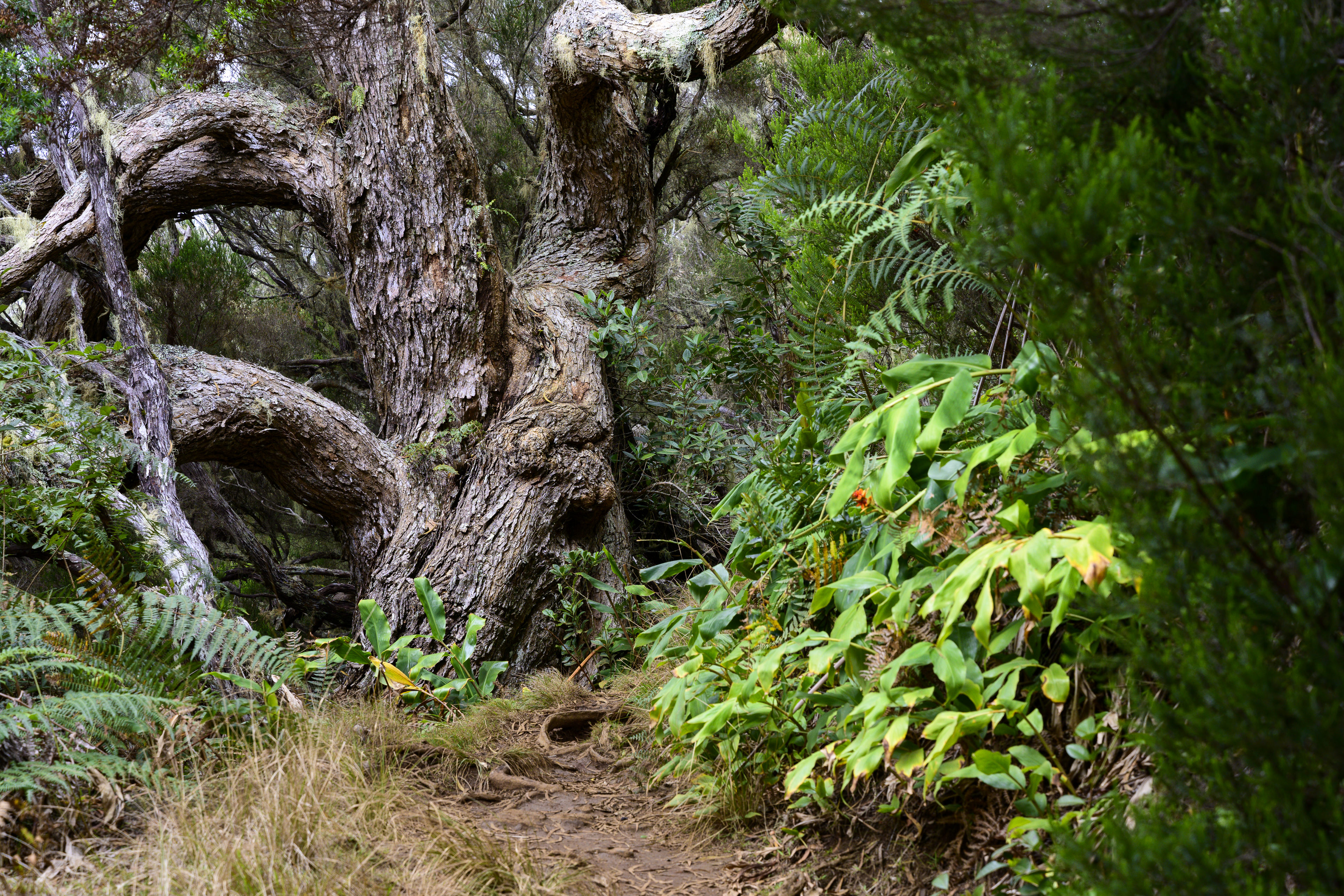 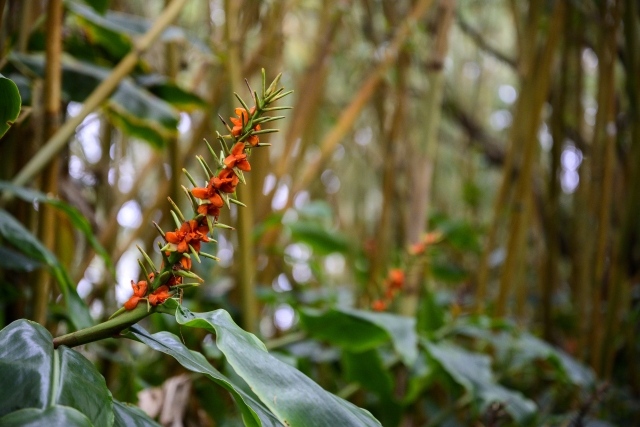 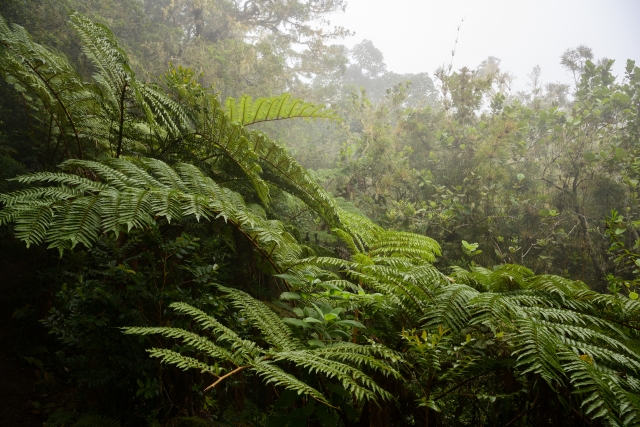 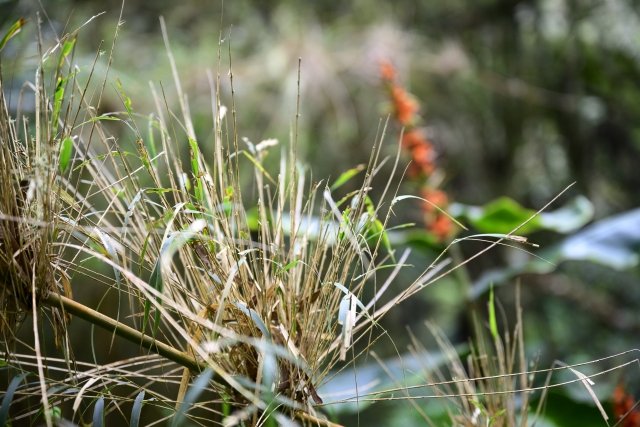 A plant quite typical for Réunion is the Tamarin des Hauts (roughly translated “high altitude tamarind”, lat. Acacia heterophylla). It grows in shrub form or as a tree and can reach over 20 meters in height. The tree often grows with short trunks, gladly crooked, gladly spreading if space is available. Typically found at altitudes between 1,200 and 1,800 meters in moist forests where rainfall is fairly consistent throughout the year. A peculiarity of the Tamarin des Hauts is that young plants have different leaves than older trees (in the next picture you can see that with a lot of zoom at the very top of the picture, at about 2/3 of the width of the picture, the “green tuft”, it is easier to go to [Wikipedia]). 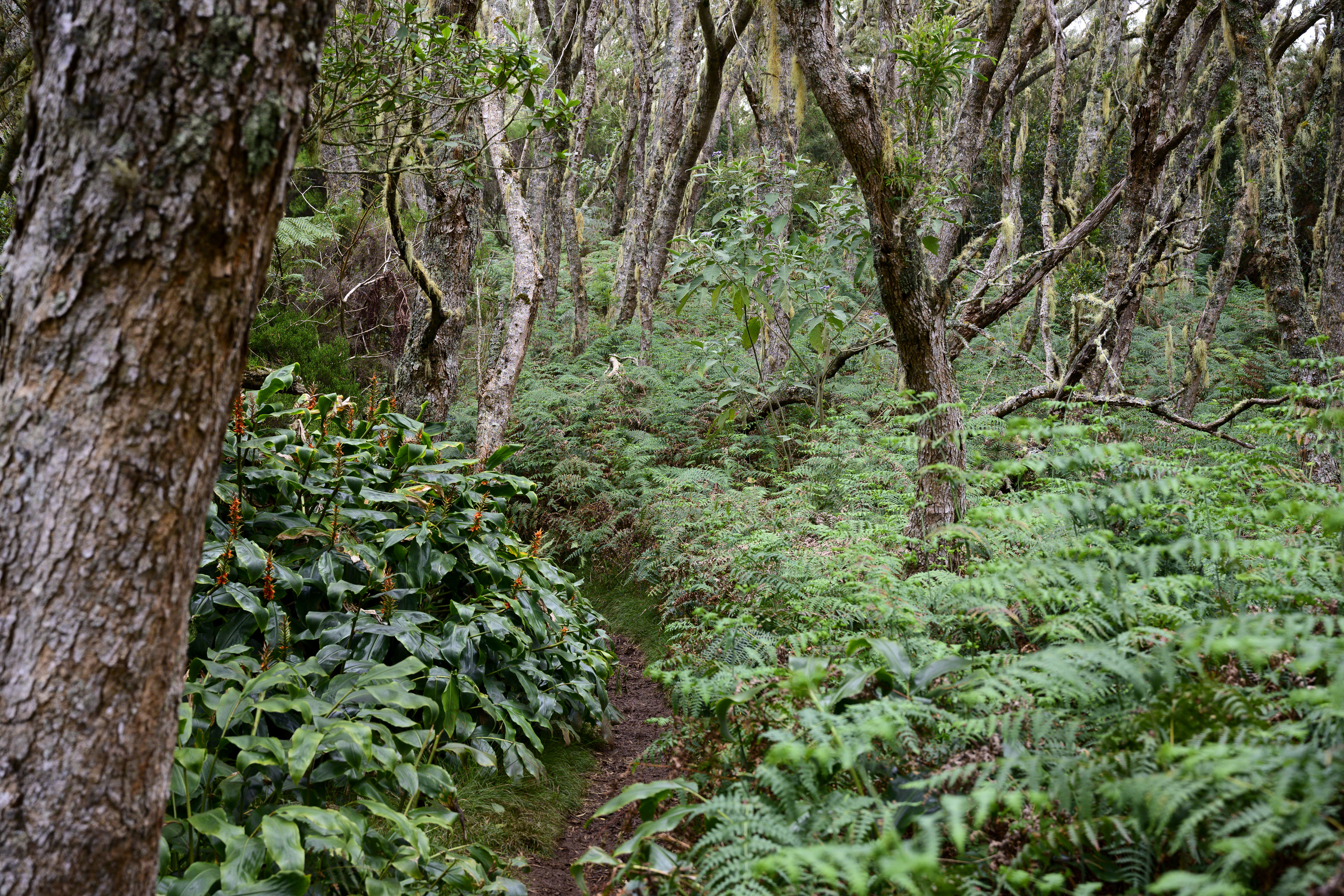 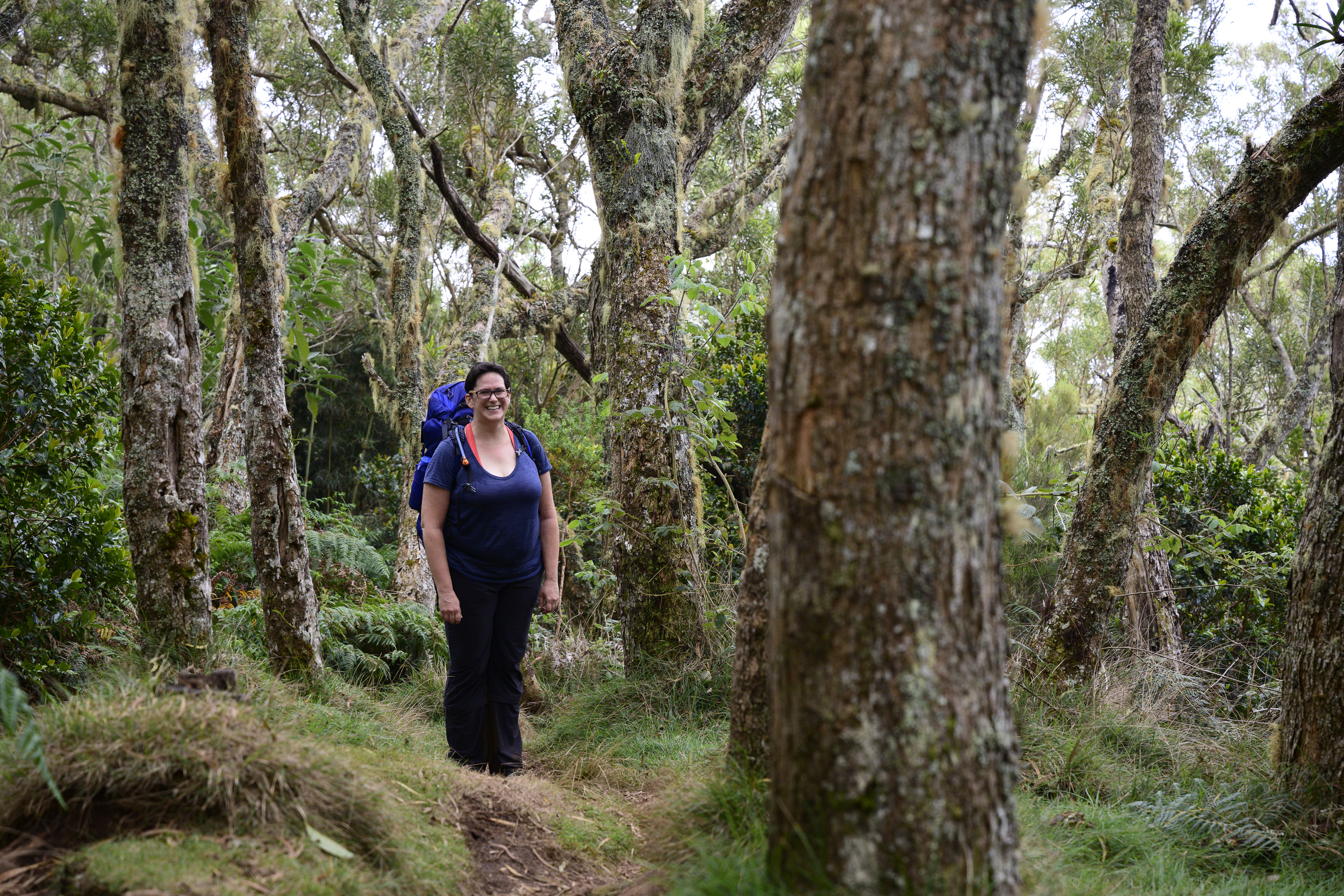 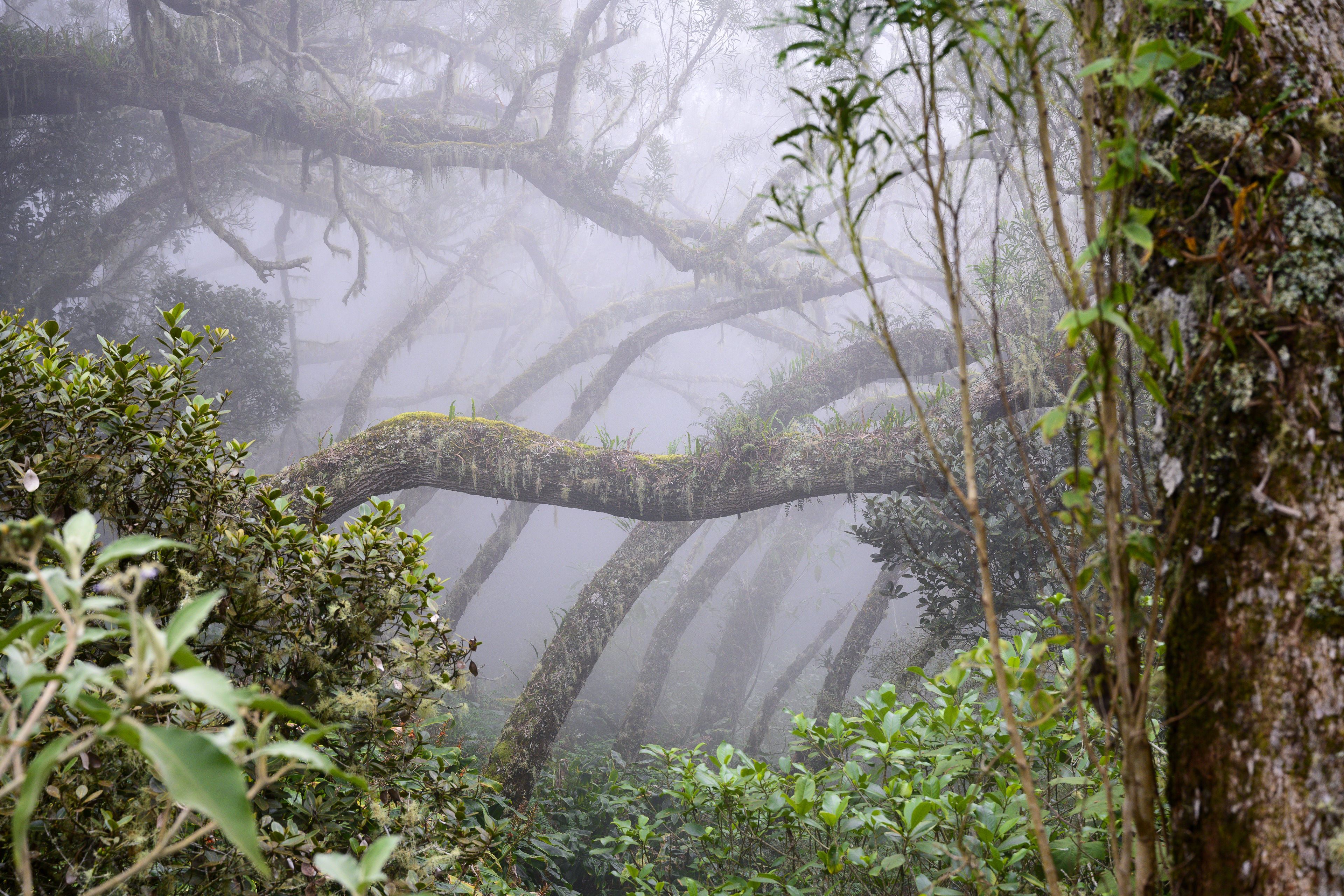 All around us it is getting wetter and wetter and foggier. The atmosphere is hard to describe, unreal and mystical. We walk silently one behind the other, setting the steps also more and more quietly – it is completely quiet, even the birds have fallen silent. So it goes the last quarter of an hour until we come out quite surprisingly on a clearing – we have reached the Gîte de la Roche Ecrite (also Gîte de la Plaine des Chicots). Around the huts are beautiful old tamarind trees. 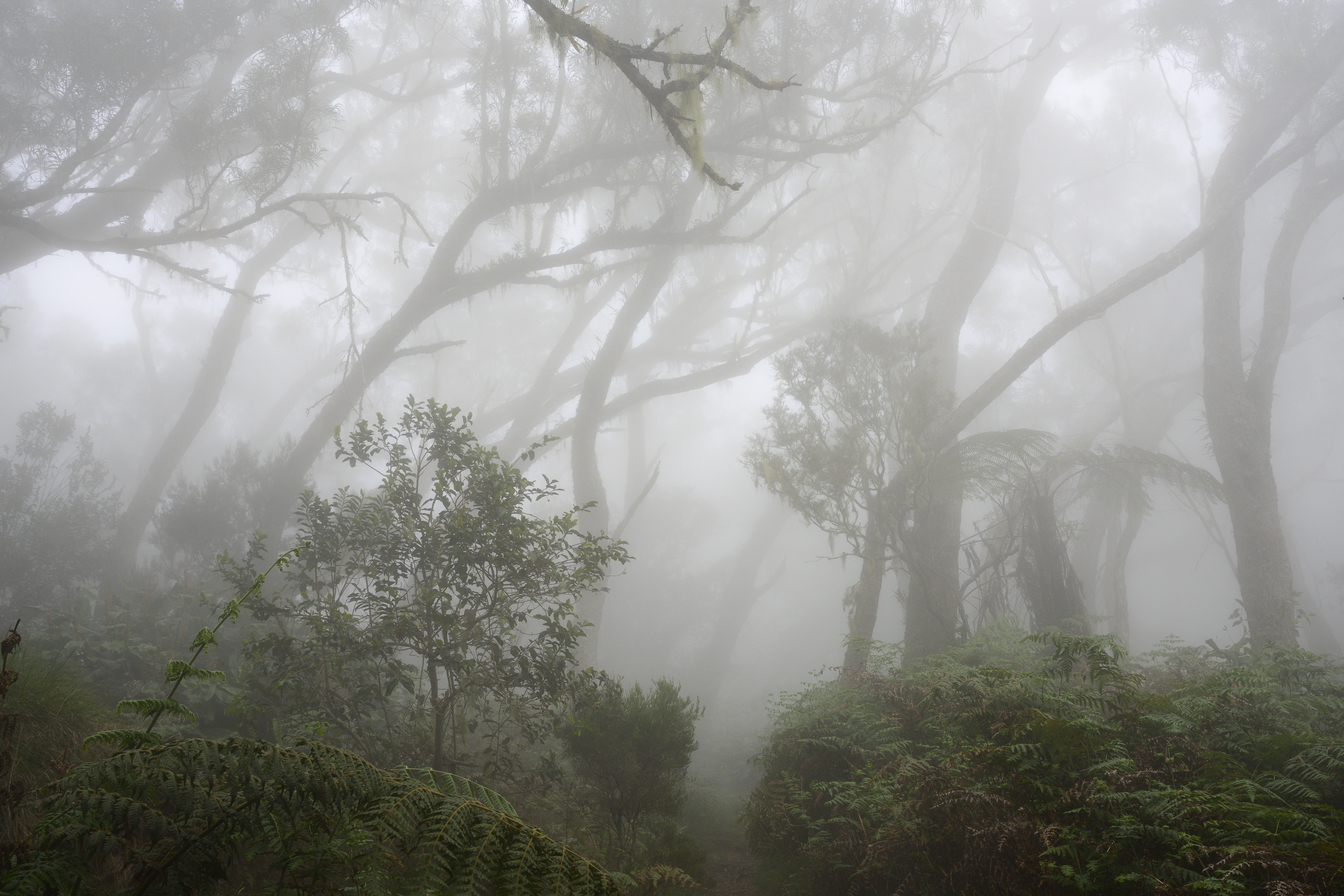 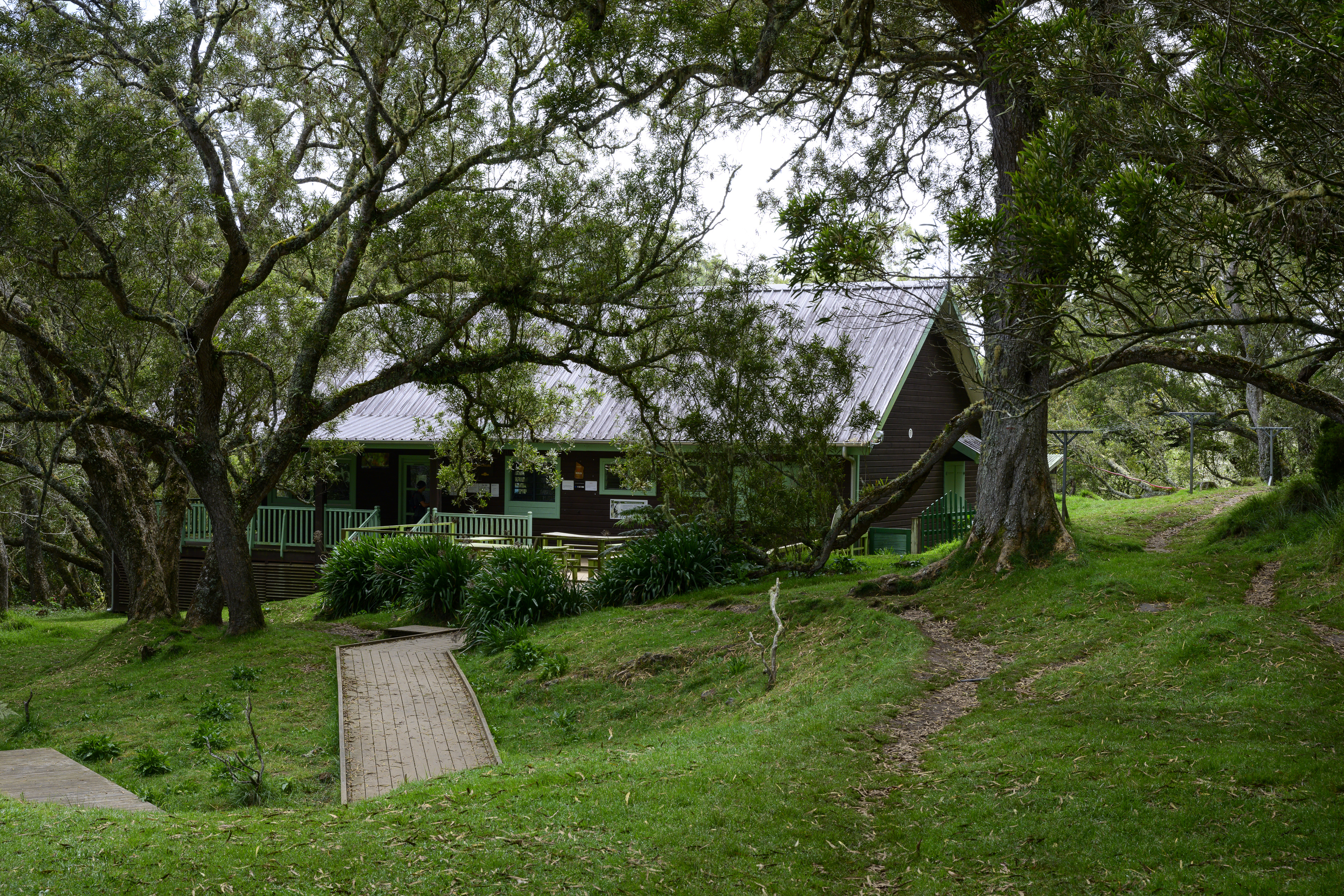 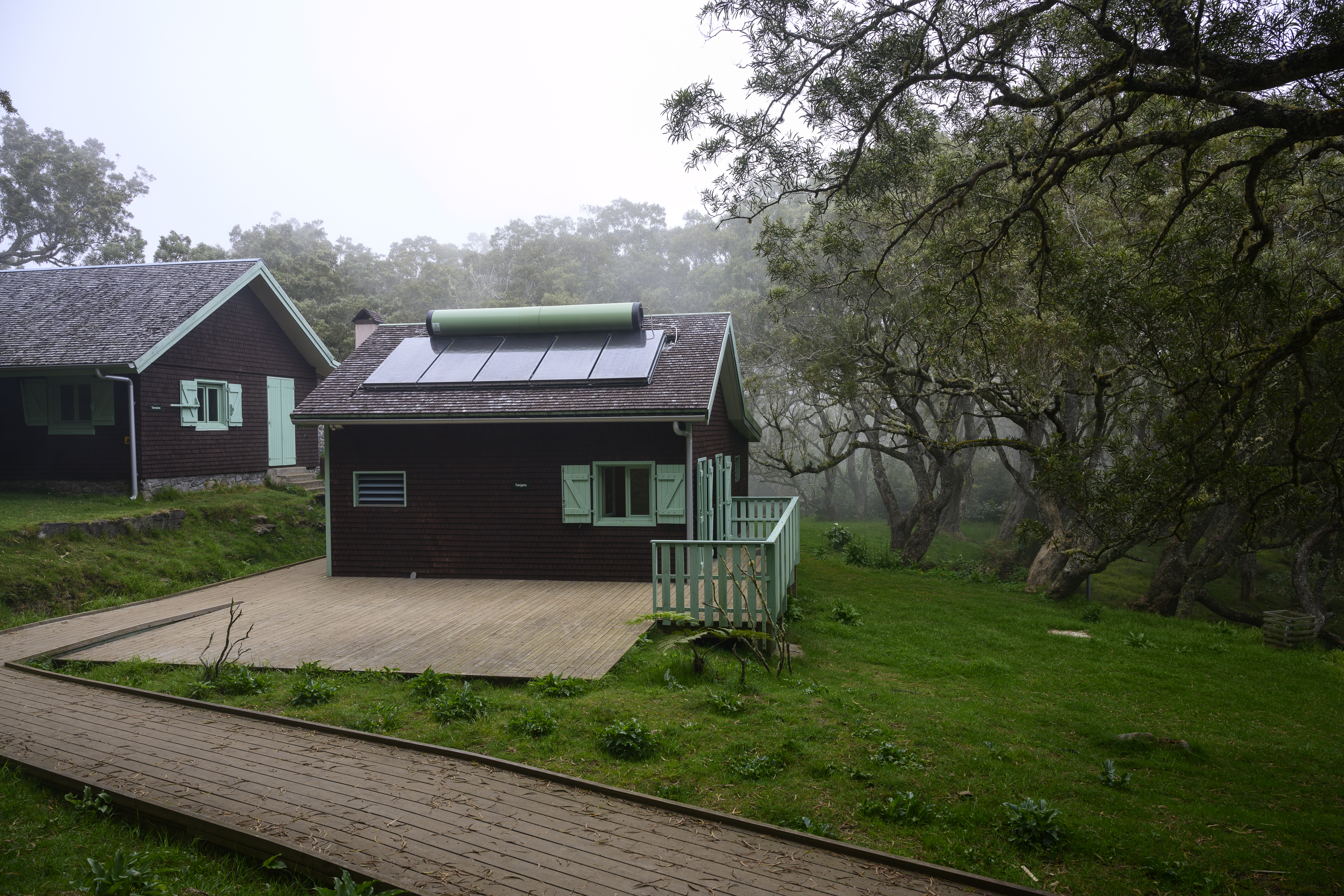 At our starting point Mamode Camp the hut was posted as 2 hours walking time, with all our photo stops it took us almost 3 hours for the 638 meters of altitude (1/2 hour break factored out).
It is now just before 1:45 pm. We sit down on the bench in front of the hut, but soon it starts to drip. For once, we are allowed to move into our room earlier and are happy to get into the dry soon. But the joy lasts only a short time: in the room it is almost as cold and damp as outside. The walls are damp, the bed is damp, the sheets are damp and from the shower comes ice-cold wet. Good that we have a washcloth with us, so the washing is somewhat bearable. We unpack the hut sleeping bags and lie down in bed until dinner. We are tired enough from the trip and the flight to sleep well.
At 18:30 we have dinner. Rum punch, vegetable soup with noodles, sausage (pork) with beans and rice and a fruit salad from a can. At dinner we chat with Valérie and Benoît, who are at home in the north of France, as well as Linda and her friend, who live on a Caribbean island, and two other Frenchmen. They all complain about the damp accommodation and the cold – not only the rooms, but also the dining room is not heated. So at least we have something to talk about right away.
At 9:00 pm we go to sleep and hope that we do not get a cold right on the first day …
This article has been semi-automatically translated as a service for foreign users. See details here.
Back to the previous entryTable of contents of this tourContinue to the next entry
3. February 2022/Tour day: 17. September 2019/by Markus
https://lustwandler.at/wp-content/uploads/2019/12/Reunion2019_DSC1264.jpg 2560 3840 Markus https://lustwandler.at/wp-content/uploads/2016/09/lustwandler-logo.png Markus2022-02-03 16:00:592022-02-03 19:22:25Day 1: Gîte de la Plaine des Chicots (1.839 m)
0 replies